Misplaced Priorities and Hubris of the Catholic Church 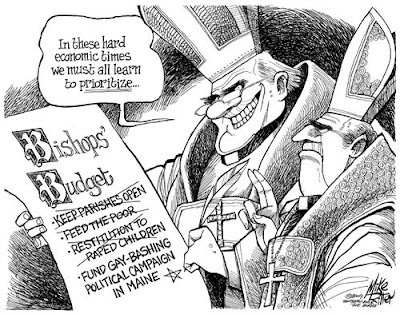 There are times I truly wonder what alternate universe was the place of origin for members of the Roman Catholic Church. For an institution plagued by a world wide sex abuse scandal, falling membership and revenues in areas of the developed world, and a increasingly elderly and doddering priesthood, one would think that the Church fathers would have better things to focus on rather than fighting in opposition to recognition of committed, monogamous same sex unions. First, there is Archbishop of Armagh and Primate of Ireland, Cardinal Sean Brady, who instead of focusing on the horrific abuses that occurred in Catholic children's homes and other Church run institutions in Ireland as revealed in a government report earlier in the year, has his panties all in a wad over CIVIL law recognition of same sex civil unions. Someone truly needs to smack this blow hard up on the side of the head and tell him to shut his mouth until such time as the Church has cleaned up its own mess and done a thorough house cleaning of its own ranks. I can only surmise that the good cardinal is trying desperately to change the topic from that of the Church's failures and guilt. Here are a few highlights from the Catholic News Agency (an oxymoron in and of itself):
*
The Archbishop of Armagh and Primate of Ireland, Cardinal Sean Brady, spoke out last Sunday against recognizing civil unions for homosexuals during a homily at the Cathedral of St. John in Limerick. He said that natural law cannot be violated by legislative norms, and that natural law forms the basis for integral human development. The cardinal recalled that nature must be used wisely, as Pope Benedict XVI explains in his encyclical “Caritas in Veritate.” . . . Cardinal Brady urged the faithful to oppose a measure being debated in the Irish Parliament that would grant legal recognition to same-sex unions.
*
I would suggest that if the alleged "natural law" is so important, then it must certainly dictate against celibacy which refutes the role of procreation just as much as same sex relationships. The Church's hypocrisy, however, ids not limited to the other side of the Atlantic Ocean. In Maine where Catholic parishes are being closed and consolidated due to declining membership and/or revenues, the bitter queens in the Church hierarchy are nonetheless contributing moneys to over turn same sex marriage legislation passed earlier this year. The Portland Press Herald reports in part as follows on parish closings:
*
Monsignor Rene Mathieu announced Sunday that Notre Dame de Lourdes and St. Mary of the Assumption Church in Biddeford will close at the end of this year, as part of a statewide consolidation that started in 2004, shortly after Bishop Richard Malone was installed. St. Andre Church in Biddeford will close at the end of 2010. Also Sunday, Monsignor Marc Caron announced in Lewiston that he plans to ask Malone's permission to close St. Joseph and St. Patrick churches, and he will discontinue their use in October.
*
Collections in the parish's churches have been dropping about 10 percent a year, and the sour economy hasn't helped. Weekly collections this year have been about $5,000 less than they were last year. The church's ministries and operations cost about $2 million a year, not including support for the parish school. Meanwhile, operating costs such as employee health insurance and building maintenance have been rising. Good Shepherd Parish had a $48,000 deficit in the past fiscal year and projected a $170,000 deficit this year if no changes were made, according to the Roman Catholic Diocese of Portland.
*
But money is available when it comes to interfering with legal CIVIL rights of same sex couple in Maine. Yes sir, the Church has money to bash those sodomites. As America Blog reports, the Diocese of Maine could find $100,000 to donate to the effort to repeal Maine's same sex marriage law:
*
Earlier this week, the forces trying to repeal Maine's new same-sex marriage report filed their first campaign reports. Focus on the Family and the National Organization for Marriage were major donors. There was also $100,000 contribution from the Diocese of Maine, which seemed like a lot of money coming from an entity that's been closing down parishes. The spokesman for the anti-marriage campaign, Marc Mutty, who is also the spokesman for the Diocese of Maine, couldn't or wouldn't give a definitive explanation of the donation.
*
[T]he leaders of the Catholic church in Maine think it's more important to be anti-gay than to keep open churches? Maybe that's one reason parishes are closing.
*
The main stock in trade of the Catholic Church nowadays seems to be hypocrisy as opposed to preaching the Gospel of Christ..
Posted by Michael-in-Norfolk at Wednesday, August 26, 2009