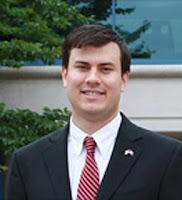 I am sure that this story will get the Christo-fascists at The Family Foundation ("TFF") hopping mad and cause its executive director, Victoria Cobb, to start foaming at the mouth and convulsing on the floor. A GOP candidate for the Virginia House of Delegates has - oh the horror - taken a pro-gay rights stand on several issues that are an obsession with TFF. Republican Eric Brescia is running for a district in Arlington, Virginia, historically one of the most progressive areas in the state, so an anti-gay position would not be well received by the voters of that demographically diverse district. This obviously partially explains his positions. However, what I find really interesting is that Brescia says that his pro-gay positions are in keeping with true Republican principles. And you know what? As a member of the GOP in its days before the Christianists took over the party, Republican principles of that time would support a pro-gay rights mindset. Here are some highlights from the Sun Gazette:
*
A candidate for office in Arlington who wants to get rid of the state constitutional amendment banning gay marriage, eliminate the military’s “don’t ask, don’t tell” policy and allow the county government to give domestic-partner benefits to unmarried members of the government workforce?Sounds like it’s pretty standard stuff for a Democrat. But coming from a Republican, it might raise some eyebrows.
*
And yet that’s where Republican Eric Brescia stands. Brescia, seeking to succeed retiring Democratic Del. Albert Eisenberg, has made gay rights a theme prominent enough in his campaign to be featured, if in generalities only, on his Web site. “If I’m elected, I will actively fight for full equality under the law for gays and lesbians,” Brescia told the Sun Gazette.
*
“Religious organizations should continue to be free to recognize marriages according to their own teachings, but the principles of separation of church and state and equality under the law demand that we allow consenting adults, whether gay or straight, to enter into civil marriage,” he said.
*
Brescia, an economist who was drafted to run earlier this year, said he supports ending prohibitions on service in the military by openly gay individuals; supports adding sexual orientation to protected classes in Virginia’s hate-crimes and fair-housing rules; and supports allowing local governments in Virginia to give certain benefits to unmarried partners of government workers, something Arlington officials have been seeking since 1997. Brescia said it all boils down to basic Republican core values. “I’m a Republican because I believe in individual freedom, the right to contract and equality under the law,” he said.
*
Both contenders not only find themselves to the left of Republican gubernatorial candidate Robert McDonnell on the issue, but also to the left of Democratic gubernatorial candidate Creigh Deeds, who relatively consistently opposed gay-rights measures when they came before the state Senate. That doesn’t concern Mark Kelly, chairman of the Arlington County Republican Committee.“Eric’s candidacy has been met with enthusiasm by Arlington Republicans, even though some may differ with him on some of the issues,” Kelly said.
*
The Arlington Gay and Lesbian Alliance (AGLA) hadn’t been aware of Brescia’s positions until queried by the media, but the organization’s president said she was pleased to hear of them. Beth Kozlow said AGLA planned an October candidate forum in which Brescia, Hope and Ruebner - plus candidates for other offices - could lay out their positions on issues of concern to the local gay and lesbian community. Kozlow said it is a savvy move on Brescia’s part to stake out inclusive positions on issues of importance to the gay community.“If he wants to appeal to where Arlington County is on this issue, it’s a wise position to take, [and] not entirely surprising,” she said.
*
The reality is that as the older homophobic generations die off, to win elections politicians will have to face the fact that younger generations of voters favor gay equality. Thus, it will be a case of changing with society or getting defeated at the polls. True, this change will take far longer to occur in backwards areas of Virginia such as Martinsville and backwaters in the far southwest of the state. Nonetheless, the change WILL come eventually.
Posted by Michael-in-Norfolk at Sunday, August 23, 2009