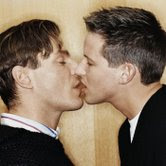 As my immediately prior post illustrates, those who selective pick to enforce passages of the Bible to discriminate against LGBT Christians are, in my opinion, hypocrites and I would argue false Christians. Sadly, this label applies to some within the Evangelical Lutheran Church in America who are convulsing on the floor over the Churchwide Assembly's decision to allow partnered clergy in same sex relationships to be full Lutheran clergy. All those other Bible passages and prohibitions against divorce do not matter a bit to these folks - just the purported anti-gay passages. Crosswalk.com has a story on the doings amongst the anti-gay elements of the ELCA. Here are some highlights:
*
The Evangelical Lutheran Church in America had debated lifting its ban on non-celibate gay clergy for years, with tensions flaring at each biennial Churchwide Assembly. Still, when the ban was finally lifted late Friday (Aug. 21), it came as a surprise -- and an unwelcome one at that -- to some conservatives in the nation's largest Lutheran denomination. "The first reaction is that they are stunned," said the Rev. Jonathan Jenkins, who addressed the new clergy policy at his Holy Trinity Lutheran Church in Lebanon, Pa. "We've been talking about this as a possibility for some time, but I think most of our people did not expect this to happen."
*
Even before last week's convention in Minneapolis, conservatives in Lutheran CORE, which counts about 300,000 members, planned to hold their own gathering next month in Indianapolis. CORE leaders said the group will consider a range of options, from creating a separate church within the ELCA to directing donations away from the ELCA's Chicago headquarters.
*
Delegates at the ELCA's convention said opening the pulpit to gay clergy in committed, monogamous relationships accords with the Bible's overall message of tolerance and inclusion. But conservatives say the Bible clearly denounces homosexual activity, and that any church that condones homosexuality has turned its back on Scripture.
*
"We are being inundated with calls from former ELCA congregations," Sullivan said. "I expect that at the very least, we will double in the next year and a half." The LCMC has about 175 member congregations in the U.S.; the ELCA has approximately 10,000 congregations. Sullivan said he had talked to 25 congregations on Monday alone.
*
Robert Benne, director of the Center for Religion and Society at the ELCA-affiliated Roanoke College in Virginia, said conservatives will likely head in many different directions, and predicts that at least 200 congregations will soon distance themselves from the ELCA. "It's going to be very diffuse," said Benne, who serves on the advisory board for Lutheran CORE. "Some lay people will want their congregation to leave, some will want to be assured that their congregation" will not hire a gay pastor. Still others will withhold sending money to ELCA headquarters and some will "reluctantly go along with what happened," Benne said.
*
It must be wonderful to believe that you have a direct link to God and can get dispensation from a multitude of Bible passages yet selectively invoke a handful against other human beings in an effort to keep them marginalized and subject to discrimination. Doesn't seem like something Christ would condone.
Posted by Michael-in-Norfolk at Thursday, August 27, 2009

"those who selective pick to enforce passages of the Bible to discriminate against LGBT Christians are, in my opinion, hypocrites and I would argue false Christians."

I have to respecfully disagree with you on that, Michael. Homophobes are true Christians, and liberal church members are the hypocrites.

Does Christianity mean you believe in, and follow, both testaments of the Bible? If so, then most Christians live in quite bad faith, most of the time.

And thank small-g god that the vast majority of the mainstream laity are hypocrites. Life for them, and for us, would be insufferable otherwise.

Reagan, McCain, et al couldn't live by the bible's rules. Nobody can. What good is it? And what good is a religion based on it?

I don't mean to be deliberately confrontational, Michael. I respect your viewpoint. But I have yet to hear anyone describe "true" Christianity in a way that actually depends on the Bible, or even a belief in Christ, as its moral compass.

The "Golden Rule" was around for a long time before Christ, you know!