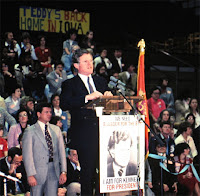 My earlier post on the Death of Edward Kennedy has prompted some nasty comments maligning the man, bring up the scandals of his younger days and so forth. As is the norm, these comments are by anonymous posters who lack the balls to publicly identify themselves. In short, they are the typical gutless cowards of the right who can take cheap shots at others as long as their identity remains anonymous. I never said that Ted Kennedy was a saint or that he never did anything reprehensible. I will also posit that I have no idea as to whether Kennedy was truly contrite for some of his past actions - only God knows what was in his heart in his final days.
*
Simply put, I believe that no one should judge another lest they be judged, other than perhaps in cases where individuals knowingly and deliberately lie with the intentional goal of harming others - anti-gay bigots and racists are but two examples of this latter category. They are basically in the same category in my opinion as the false Christians I recently wrote about praying for Barack Obama's death or seeking the execution of LGBT Americans.
*
As I have said before, if you are too gutless and cowardly to reveal your true identity, then do NOT expect me to provide a platform for your noxious commentary.
Posted by Michael-in-Norfolk at Wednesday, August 26, 2009