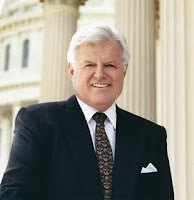 I only met Ted Kennedy once years ago while a student at the University of Virginia in the days when Chuck Robb was the president of the law school's Student Legal Forum, but I recall how impressed I was by him. Back then, Kennedy was in his early 40's and a very handsome guy in person not to mention a moving speaker. Lunatics of the far right will probably rejoice at Kennedy's passing, but for those who value civil rights and equality for all citizens, Kennedy never let up the quest and he was certainly a friend to LGBT Americans. Like all of us, he made mistakes in his life time, but tried to make a meaningful difference for others - for that I commend him. It will be difficult to replace his stature in the Senate and it will be interesting to see who is picked to replace him. Here are highlights from the Washington Post:
*
Edward M. Kennedy, one of the most powerful and influential senators in American history and one of three brothers whose political triumphs and personal tragedies captivated the nation for decades, died late Tuesday at his home in Hyannis Port, Mass., at age 77. He had been battling brain cancer.
*
His family announced his death in a brief statement released early Wednesday. "We've lost the irreplaceable center of our family and joyous light in our lives, but the inspiration of his faith, optimism, and perseverance will live on in our hearts forever," the statement said. "We thank everyone who gave him care and support over this last year, and everyone who stood with him for so many years in his tireless march for progress toward justice, fairness and opportunity for all."
*
President Obama released a statement Wednesday morning, pointing out that "virtually every major piece of legislation to advance the civil rights, health and economic well being of the American people bore his name and resulted from his efforts. . . .
*
Long before he fell ill, Kennedy made health care a major focus of his career, terming it "the cause of my life." His legislation resulted in access to health care for millions of people and funded cures for diseases that afflicted people around the world. He was a longtime advocate for universal health care and was instrumental in promoting biomedical research, as well as AIDS research and treatment. He was a leader in the passage of the Americans With Disabilities Act of 1990 and the 1996 Kennedy-Kassebaum Bill -- with Sen. Nancy Kassebaum (R-Kan.) -- which allowed employees to keep health insurance after leaving their job.
*
On most other issues, most notably the U.S. invasion of Iraq, Kennedy was bitterly opposed to the Bush administration. He once said that his proudest Senate vote was his 2002 vote against authorizing Bush to use military force against Iraq. "There was no imminent threat," he said in a 2004 speech at the Brookings Institution. "This was made up in Texas, announced in January to the Republican leadership that war was going to take place and was going to be good politically. This whole thing was a fraud."
Posted by Michael-in-Norfolk at Wednesday, August 26, 2009