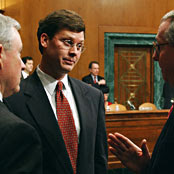 I realize that I write about the hypocrisy of the GOP often - some might say too often, but sometimes the stuff that comes out of the misadventures of the "family values" crowd is just too outrageous to pass up. A case in point is the diary that former Rep. Chip Pickering of Mississippi (pictured at left) kept as he allegedly carried on an extramarital affair with Elizabeth Creekmore Byrd. As The Daily Beast is reporting, Pickering recorded details of his exploits in a secret diary, including the dates and locations of his adulterous encounters. To make the matter even more fun, Pickering's diary is getting sucked into what will likely be a wildly vicious divorce case. Not only is Pickering - a former resident of the C Street house I referenced yesterday - a major league hypocrite but also amazingly stupid to keep such a diary. That Pickering once was President of the Mississippi Baptist Convention just makes his hypocrisy all the more over the top. P.S. Local Congressman J. Randy Forbes belongs to the C Street "ministry." Here are some highlights from The Daily Beast:
*
Pickering, a Republican, described several assignations he had with Creekmore Byrd inside the C Street House, a Capitol Hill townhouse inhabited by an all-male group of right-wing Republican congressmen belonging to The Fellowship, an evangelical group, according to a person familiar with the diary's contents.
*
And according to a divorce filing by Pickering’s estranged wife, Leisha, the former congressman’s diary reveals the identities of several men who enabled his adulterous trysts and helped him cover his tracks.
*
Thanks to heavily politicized local courts and an aggressive damage-control campaign waged by Pickering and his powerful Republican allies, the diary, which is said to contain the answers to these questions, is locked away in a courtroom in Mississippi. And if Pickering has his way, it will stay there indefinitely.
*
Pickering was once considered one of the GOP’s brightest stars. An ardent social conservative and defender of “traditional marriage,” he was seen as a shoo-in for former Majority Leader Trent Lott’s Senate seat when Lott retired in 2007. Indeed, according to Leisha Pickering’s divorce filing, Mississippi Governor and former Washington super-lobbyist and Republican National Committee Chairman Haley Barbour personally offered Pickering the seat. But according to the divorce filing, Creekmore Byrd “insisted that if Pickering accepted the position in the Senate that their relationship would not be able to continue.” In the end, Pickering chose his mistress over his congressional career and his wife.
*
Chip Pickering is the scion of one of the most influential Republican families in Mississippi, son of retired federal appeals court Judge Charles Pickering, one of the founders of Mississippi’s post-civil rights GOP and past president of the Mississippi Baptist Convention.
*
Though Pickering is now out of Congress, the suppression of the diary is a high priority for Republican Party leaders from Washington to Mississippi. The GOP is reeling from sex scandals involving two men associated with the C Street House, Gov. Mark Sanford of South Carolina and Senator John Ensign of Nevada. The revelation of private emails between Sanford and his Argentine mistress and the exposure of payments from Ensign’s casino-mogul parents to his mistress prolonged the back-to-back public-relations disasters for weeks beyond the first reports of the affairs.
*
The release of Pickering’s diary would likely have an electrifying effect, reigniting media interest in his dalliance and drawing renewed attention to the C Street evangelical men’s group to which he and other Republican lawmakers have belonged.
*
A source close the case told me the judge presiding over the lawsuit could rule to make the Pickering diary public, thereby voiding Brewer’s decision in the divorce court. So long as the judge’s decision is pending, the diary represents a ticking time bomb—with the potential to rock corridors of conservative power from Jackson, Mississippi, to C Street in Washington.
*
Personally, I hope that time bomb explodes and exposes just what hypocrites so many of today's GOP "family values" politicians are in fact.
Posted by Michael-in-Norfolk at Monday, July 27, 2009