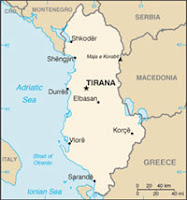 In yet another embarrassment to the USA - the alleged land of the free and home of religious freedom - Albania's government has announced that it will push for same sex marriage rights. It's amazing how parts of the world often thought of as backwaters by many Americans - assuming they can even locate them on a world map - are increasingly progressive while the USA remains under the influence of Christianists who want to drag the nation back to a time of ignorance and religious based superstition. Virginia, naturally does it best to remain in the 19th century in areas of social policies and equality under the civil laws. Meanwhile, Barack Obama dithers and sits on his thumbs rather than act as an advocate for equality for ALL Americans. Here are some highlights from Balkin Insight.com:
*
Albanian Prime Minister Sali Berisha announced in a cabinet meeting on Wednesday that the government would push for a law that recognises homosexual marriages. “This is an important law against discrimination,” said Berisha, who often stresses the importance of family values.
*
The prime minister said that the law had already been put to parliament and that MPs should treat it seriously because it provides a legal basis against discrimination, bringing the country into line with a framework already approved by the EU, which Albania aspires to join.
*
Although deeply secular, Albania is one of the three countries in Europe with a Muslim majority - with Bosnia and Kosovo - and it is unclear how the government’s decision will be accepted by the public. While the Albanian parliament decriminalised homosexual relationships in 1995, more than a decade later, gays and lesbians are still heavily stigmatised, and a majority live clandestine lives, fearing that if their sexual orientation is discovered their safety will be endangered.
*
Human rights reports on Albania concede that ingrained attitudes among the public leave Albanian gays and lesbians on the fringes of society. AHRG reports that Albanian homosexuals face “intolerance, physical and psychological violence - often from the police - and discrimination in the workplace.”
*
Hopefully, the legislation passes. Governments can help shape public acceptance by removing inequalities under the civil laws that deprive anti-gay bigots of laws to point to that support their intolerant and religious based discrimination. Something Obama doesn't seem to grasp.
Posted by Michael-in-Norfolk at Friday, July 31, 2009