I have written a number of times about Bob "Taliban Bob" McDonnell's efforts to market himself as a moderate in this years election contest for governor of Virginia - even though in actuality McDonnell is a puppet for Pat Robertson, James Dobson and the toxic Family Foundation. Now, Ken Cuccinelli, the GOP candidate for attorney general is apparently trying to use the same tactics as McDonnell even though as extremists go, Cuccinelli makes McDonnell look like a flaming liberal. Cuccinelli is a dogmatic Christianist who is anti-abortion in every case, would have gays rounded up and driven from the state if he could, and is a true Kool-Aid drinker when it comes to being a racist, anti-immigrant, anti-gay, religious extremist.
*
Blue Virginia caught Cuccinelli trying to sanitize his campaign website to strip it of all its nut case fringe elements. Fortunately, a pre-sanitizing shot remains which shows Cuccinell's real nutcase agenda. If you want the Christian equivalent to a Islamic grand ayatollah, then Cuccinelli's your man. If you believe in secular government and religious freedom for all, then he MUST be defeated. Here are some highlights from Blue Virginia:
*
[T]his is what it [the social issues page] used to look like, before he (apparently) started his faux-"moderate" makeover for the 2009 elections, just like Bob McDonnell. Fascinating. 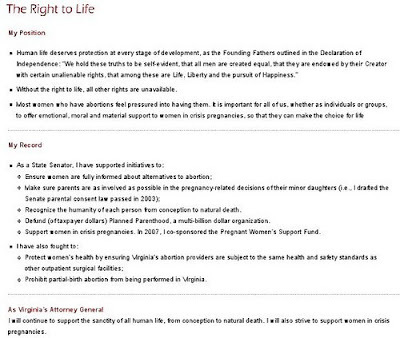 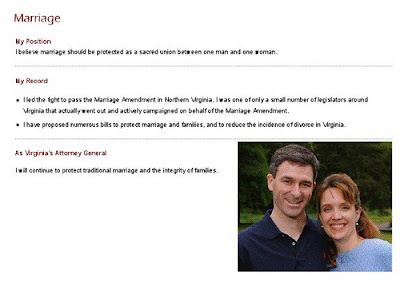 This is what one finds now if they try to see where Cuccinelli stands on issues like marriage, gay rights, and abortion - the page has totally disappeard.

Again, it is absolutely critical that Cuccinelli's real positions be exposed and that he be defeated in November. He is nothing short of a clear and present danger to the rights and lives of other citizens of the Commonwealth. One has to ask again, where is the main stream media when it comes to reminding the public what McDonnell and Cuccinelli were preaching to the lunatic base of the GOP in prior years?
*
P.S. Watch Cuccinelli talk about why he is not going to get a social security number for his soon to be born 7th child (something tells me that he's a "birther" too):
Posted by Michael-in-Norfolk at Saturday, August 01, 2009

"Coooch" even even worse than all that.

If "Coooch" takes the AG office it is going to be hell for women, people of color, Latinos, queer folk and anyone who thinks left of Salazar .

Next debate he should be asked how he plans to handle the right wing terrorist attacks on women's health clinics.

I would bet he supports the killing of Dr.s