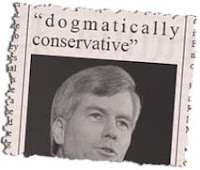 I have written before about Bob "Taliban Bob" McDonnell's extremist past on social issues yet to date he continues to masquerade as a moderate and there is little questioning by the media on issues that many Virginians need to know about. The Virginia Democrat has a new post that asks some of these questions. The issue is when and if the lazy mainstream media will get off its ass and begin some serious questioning of McDonnell. The same also holds true for GOP Attorney General candidate Ken Cuccinelli who is even more extreme than McDonnell. If these two men are elected in November, Pat Robertson and James Dobson and similar enemies of religious freedom will be de facto members of Virginia's highest levels of government. Here are some highlights:
*
The sole question in this campaign seems to be whether Bob McDonnell will be able to pull the wool over Virginians’ eyes long enough to convince enough people to vote for him. Based on his recent debate with Creigh, he might be able to pull it off. Take McDonnell’s extremist stances on two significant social issues, abortion and gay rights. In the debate, McDonnell was successfully able to paint himself as a moderate on these issues.
*
Bob McDonnell is no moderate on these issues. The fact is that McDonnell’s election potentially endangers the life and health of every woman in Virginia. McDonnell’s record shows that as a legislator, he tried at every turn to limit a woman’s right to choose, effectively seeking to prevent women in Virginia from deciding upon their own health care in consultation with their doctors. Similarly, Bob McDonnell has a record as a repeat offender of bigotry toward homosexuals. . . . Does Bob McDonnell favor the teaching of crackpot theories like Intelligent Design in public school?
*
So, three takeaways:
*
1. When Bob McDonnell soft-pedals his positions on choice and gay rights, shouldn't he explain why his record is inconsistent with his rhetoric?
2. Bob McDonnell holds principled positions on the issues of choice and gay rights that he claims are informed by his religious beliefs. As a religious person, I disagree with him. But the question is why does he feel the need to run away from his principles?
3. Given that religion figures so heavily in McDonnell’s stances on other social issues, where does he stand on the issue of evolution and teaching Intelligent Design in our public schools?
*
I would also suggest that McDonnell also needs to be asked why he covered up for former Congressman Ed Schrock's gay trysts for over seven months before Mike Rogers at BlogActive.com outed Schrock.
Posted by Michael-in-Norfolk at Thursday, July 30, 2009