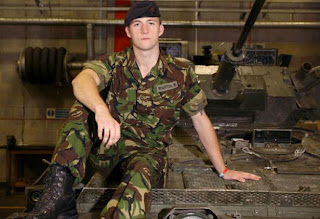 What a concept - a military where religious based discrimination is not enshrined in military policy. For a glimpse of how gay and lesbian service members might serve in the U.S. military if only Christianist backed religious discrimination was eliminated one only need look at the British military. U.S. troops have served along side British troops in both Iraq and Afghanistan - including openly gay British troops - without incident. This ought to demonstrate to all who are not Neanderthals and bigots that gays in the military should be a non-issue. I'd go so far as to state that if members of the military cannot cope with serving with gay troops, then it is they, not the gays who should be discharged. Here are some highlights from The Independent:
*
In the genteel atmosphere of the Coldstream Guards' officers' mess, Lieutenant Mark Wakeling was known as "thug". Amongst his fellow guardsmen, he prided himself on being the toughest, the fittest and the most aggressive. He not only laughed at homophobic jokes – he was the "straightest of the straight" amongst the young officers. When one of his platoon admitted to being gay, he immediately started the discharge process.
*
Nobody realised that behind the excessively macho behaviour was a young man who lived in fear that his own homosexuality would be discovered. Eventually, the pressure became too much and he cut short his military career and resigned his commission.
*
This month, for the first time in its history, the cover of the British Army's official publication Soldier magazine shows Trooper James Wharton – openly gay – clad in his dress uniform, complete with Iraq medal, next to the headline "Pride". It is the most obvious sign that almost a decade after the military lifted the ban on homosexuality it is finally comfortable with its new clothes.
*
Perhaps most tellingly, senior officers from the US have been quietly holding talks with their British counterparts on how America can change its "don't ask, don't tell" police which has seen more than 12,500 members discharged since its inception 16 years ago.
*
For Mr Wakeling, the news that Trooper Wharton can genuinely live openly as a gay man with a boyfriend in another ancient and prestigious regiment, the Household Cavalry, generates such obvious turmoil that he has to pause to compose himself. "I can't express how fantastic it is to know they are able to be themselves. I regret that I lost out. I felt I didn't really fulfil my ambition in the army. It was tragic. I was a good soldier. I could have been useful to the army," explained Mr Wakeling.
*
The legal change allowing the gay to openly serve took place in January 2000 after a two year legal battle involving three gay men and a lesbian, who had been discharged from the Royal Navy and RAF after being found to be gay.
*
[T]he predictions proved wrong and the military entered its brave new world with surprising ease. A confidential review two years later across all three services found that most officers and junior ranks, particularly among the younger ones, had accepted the lifting of the ban without much comment. It was only amongst the older Senior Non-Commissioned and Warrant Officers that it had met significant resistance.
*
"I would be lying if I say there was no bullying that happened but it is certainly less than other offences such as racial or sexual harassment," explained Lieutenant Colonel Colin Bulleid of the British Army Equality and Diversity Policy Branch. "There has been no overt homophobic hate wave. We occasionally get the odd prat who behaves inappropriately. But he gets stamped on when he gets found out. We have a reasonably good complaints system."
*
Apart from simply accepting the change, the last few years has seen a military hierarchy choosing to be vocal and visible on the subject, advertising in the gay press for recruits and seeking to openly connect with a community that still treats it with some suspicion. In 2005, the Royal Navy joined the Stonewall diversity champions programme for employers, followed 12 months later by the RAF and finally last year, by the army. In similar sequence, each service has allowed its soldiers to march (to great applause) at the Gay Pride event. Several personnel are now listed in the Independent's Pink List of the most influential gay and lesbian people in Britain.
*
The story also cites several British military legends who were suspected of being gay - thus showing the stupidity of discharging qualified members of the military solely to satisfy the hate and religious based bigotry of people like Elaine Donnelly, Pat Robertson, James Dobson and similar professional Christian snake oil merchants.
Posted by Michael-in-Norfolk at Monday, July 27, 2009