Martyred and Murdered - And Show Trials 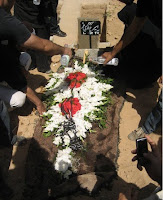 I continue to watch events in Iran with a mixture of hope and dismay. Personally, I think in the long term the Islamic dictators are making huge mistakes. While they seem intent on making examples of protesters and have started the equivalent of the old Soviet Union's show trials, ultimately they are creating a whole class of martyrs the memories of which will help keep opposition alive even if it takes a long time to finally boil over. Then again, when one's motivations are power and religious extremism, logic and thoughtful analysis of the bigger picture often isn't even on the radar screen. Tehran Bureau has a story that identifies some of those murdered by the dictators' thugs which is very sad and moving. Here are some highlights (I urge readers to review the site in order to realize that brutality of the current regime):
*
A massive demonstration had been called for today [this past Thursday] to commemorate the dead of “Bloody Saturday” — the violent showdown on June 20 in central Tehran during which Neda Aga Soltan and others were killed. Opposition leader Mir Hossein Mousavi’s Facebook page announced he would pay homage at her grave at Behesht Zahra cemetery on the outskirts of the capital. Mousavi invited other mourners to join him for the Shia 40-day memorial ritual. Tehran Bureau is compiling profiles of those who died in the post-election turmoil, as confirmed by official news sites Mowjcamp, Ghalam News and other reliable sources. The list (chronologically ordered) will be updated.
*
Today's New York Times has coverage of the trials of protestors that the dictators wish to use as examples to deter others from challenging its regressive and anti-democratic policies. Again, I continue to hope that repression serves merely to inspire more contempt for the current rulers and cause fence sitters to go over to the side of the pro-democratic opposition. As with all despots, the regime is making allegations against protestors that are fabricated and hopefully will be seen as such by the wider population. Here are some highlights:
*
TEHRAN, Iran (AP) -- More than 100 opposition political activists and protesters stood trial in Tehran Saturday on charges of rioting and conspiring to topple the ruling system in the country's first trial since the disputed presidential election, Iran's state media reported. The trial underlines the government's efforts to bring to a close anti-government demonstrations that have persisted since the disputed June 12 presidential election.
*
The defendants faced charges that include attacking military and government buildings, having links with armed opposition groups and conspiring against the ruling system, Iran's official news agency, IRNA, reported. During the session, prosecutors read out an indictment outlining what they said was a yearslong plot by the top pro-reform political parties to carry out a ''velvet revolution,'' a popular, non-violent uprising to overthrow the Islamic Republic similar to ones that have occurred in Eastern Europe.
*
Among the defendants were several prominent reformist opposition activists, including former Vice President Mohammad Ali Abtahi, former government spokesman Abdollah Ramezanzadeh, former Vice Speaker of parliament Behzad Nabavi, former Deputy Foreign Minister Mohsen Aminzadeh and leader of the biggest reformist party, the Islamic Iran Participation Front, Mohsen Mirdamadi. The reformist Web site www.mowjcamp.com denounced Saturday's trial and said defendants had no access to lawyers and there was no jury.
Posted by Michael-in-Norfolk at Saturday, August 01, 2009