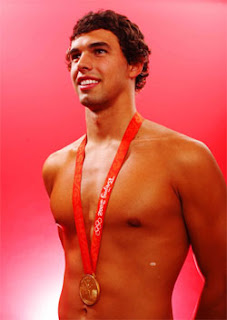 I have always like watching competitive swimming and never really been one for group team sports. Instead I have always preferred individual event sports or sports where team members compete individually for time/speed with the team result based on the collective wins. Plus, growing up, I spent summers at a lake in the Adirondacks where little league and similar sports were replaced by swimming, water skiing, canoeing and sailing. In the fall I ran cross country and my winter sports were ice skating and snow skiing, with emphasis on the latter. During the majority of my married years I lived in a neighborhood with a neighborhood pool and a summer league swim team where all three of my children swam on the team and my oldest eventually ended up coaching. Thus, I have seen a number of dedicated swimmers who stay cool and calm under pressure. But U. S. swimmer, Ricky Berens, (at left) takes the prize for remaining cool and calm under trying conditions - a swimsuit malfunction that left him partly buck naked as he did his leg of the relay. Here are some highlights from Reachforthe wall.com:

ROME, July 26 — Everyone expected the latest, most controversial high-tech swimsuits to have a major impact on these world championships, so the seven championship records set in Sunday morning’s opening preliminary heats was hardly a surprise. And most assumed Michael Phelps and the U.S. men’s 400-meter freestyle relay team would struggle to topple the powerhouse French squad in Sunday night’s final

But the suit malfunction that almost derailed Phelps and Co. before the men’s relay squad even got in the pool for the morning’s qualifying round was entirely unexpected. As Ricky Berens, scheduled to swim third for the U.S. morning swim squad, bent over on the pool deck for a drink of water moments before the race, his suit — a Jaked01 — split significantly in the back, exposing his rear end.

Berens dived in and contested his third leg as scheduled, helping the U.S. team to a fourth-place finish in its heat in 3 minutes, 11.64 seconds — and securing a critical slot in the night’s final for Phelps and his teammates. Phelps did not swim in the qualifying heat, but will lead off the relay in tonight’s final.

“He still swam his heart out,” Jones said. “To see that kind of professionalism in college; I know I didn’t have it.”Berens, the 2009 Big 12 Swimmer of the Year from Texas, was not available to comment on the suit problem. Jones, though, said tears were becoming increasingly common as swimmers sought the tightest-fitting suits possible for the greatest performance-enhancement.

Besides trying to make sure Phelps would have a chance at six gold medals at this meet, Berens, Jones, Matt Grevers and Garrett-Weber Gale also were essentially auditioning for a spot on the squad.

Check out the story for a photo of the swimsuit malfunction. :)