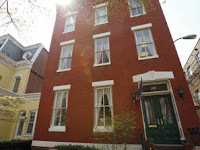 At first blush one of the strangest stories to come from the recent wave of Republican sex scandals is that all of the adulterers are allegedly "family values" conservatives and many lived at a $1.8 million townhouse in Washington, D.C., owned by purported Christian non-profit entities. On a closer look, none of this should be surprising: (1) it's the sexually repressed Christian Right ass kissing politicians who most want illicit sex - the forbidden fruit if you will and (2) many of the Christianist non-profits organizations give all kinds of in kind gifts to their GOP water carriers in ways that ought to cause them to lose their non-profit status. Hypocrites and liars flocking together so to speak. As for The Fellowship" that owns the C Street townhouse, it represents, in my view, just a small part of the Christian Right political mafia that afflicts politics in this country. Politico has a story that ought to be read by those who have not seen up front how the Christianists funnel money and gifts to GOP elected officials and thereby buy influence. Here are some highlights:
*
Lawmakers flock to 133 C St. SE for cheap rent, weekly dinners, Bible studies and spirituality sessions that serve as a sort of group therapy for some of the country’s most powerful men. But now the stately brick house is becoming known for something else: It’s ground zero for Republican sex scandals. In February, Nevada Sen. John Ensign — who lives at the house — was confronted at C Street by colleagues who wanted him to end his affair with a staffer.
*
Earlier this month, South Carolina Gov. Mark Sanford — who lived at C Street when he served in the House — said C Street was where he’d been asked the “hard questions” that were “very, very important” in his decision to admit an affair with an Argentine woman. And last week, the estranged wife of former Rep. Chip Pickering said he carried on a long-term extramarital affair while living at the “well-known C Street Complex.” The trifecta of trysts has made C Street an easy target for charges of “family values” hypocrisy . . . .
*
Although titles may not be important, there are plenty of them at C Street. In addition to DeMint and Ensign, C Street residents include Sen. Tom Coburn (R-Okla.) and Reps. Mike Doyle (D-Pa.), Bart Stupak (D-Mich.) and Zach Wamp (R-Tenn.). Sen. Sam Brownback (R-Kan.) lived in the house before moving to his own condo, and he still attends events there. Former Reps. Steve Largent (R-Okla.), Jim Ryun (R-Kan.), and Sen. Lindsey Graham (R-S.C.) have also studied at C Street.
*
The large townhouse, valued at more than $1.8 million, is run by Christian networ

k of nonprofits and ministries known as “The Fellowship.” Headquartered in Arlington, Va., . . . By ministering to the most powerful, The Fellowship believes, it can bring Christian beliefs to the larger culture. Jeff Sharlet, who wrote a book about his time in The Fellowship's Virginia headquarters, said the group believes that lawmakers have been "chosen" to lead by Jesus Christ.
*
“When you operate in secret in Washington you raise an immediate red flag and then it gets redder when it gets mixed with any ideological agenda,” said Barry Lynn, executive director of Americans United for Separation of Church and State.
*
Because of the secrecy, it’s hard to know exactly how frank the various prayer sessions are — although it’s clear that Ensign’s affair was a topic of conversation at C Street. Coburn and others confronted Ensign about the affair there last year, and Wamp said that Ensign recently apologized to fellow C Streeters for his indiscretion.
*
I'm sorry, but I have a problem with elected officials receiving living accommodations and meals subsidized by far right Christian organizations. To expect there not to be a "pay back" somewhere in return for what amounts to non-monetary gifts is naive. Not to mention the hypocrisy of the adulterer set enjoying the subsidized fruits offered by The Fellowship. Last weekend Maureen Dowd had a great column in the New York Times that looked at the C Street hypocrisy. Here are a few highlights:
*
Like cats that have lost their whiskers, the Republicans seem off balance now that they have lost their talent for hypocrisy. . . . Who can forget the glory years, when the Gipper invoked God but never went to church? When Arlen Specter accused Anita Hill of perjury to distract from Clarence Thomas’s false witness? When Newt Gingrich and other conservatives indulged in affairs with young Washington peaches as they pushed to impeach Bill Clinton?
*
The religious boardinghouse in Washington where Sanford sought succor from fellow conservatives, where he agonized to pals about his tango with the enticing María, is also back in the news. Affiliated with a secretive Capitol Hill group known as the Fellowship — which also sponsored Bible study and prayer circles attended by Hillary Clinton when she was a senator — the pious dwelling is becoming a tourist attraction, a monument to Republican hypocrisy.
*
The C Street house, as the flag-flying brick rowhouse near the Capitol is known, serves as a residence and Bible study retreat for many Christian conservative lawmakers. But it looks as if what these guys were praying for was a chance to get lucky. John Ensign, the Promise Keeper who broke all his promises, resides there.
*
Why anyone who is mentally stable and has more than a minimal education believes a word that "family values" Republicans have to say is baffling to me. How do you know when these GOP fat cats are lying? When their lips move.
Posted by Michael-in-Norfolk at Sunday, July 26, 2009