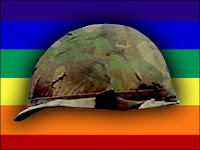 I realize that I go off about DADT regularly, but the policy is so ridiculous and given all the dedicated, loyal and competent gays and lesbians I know in the military, it burns me up that this policy continues to exist. It's sole purpose is to please anti-gay bigots and professional Christians who do nothing but spread lies and false information about LGBT Americans. It also angers me that Obama and weak knee Democrats are not moving aggressively to repeal this discriminatory policy. Further insult is added by the fact that even as gays are being forced from the military, felons and mental morons are being recruited. Here are some highlights from the San Francisco Chronicle:
*
The Army fired 11 soldiers in January for violating the military's policy that gay service members must keep their sexuality hidden, according to a Virginia congressman. Democratic Rep. Jim Moran said he has requested monthly updates from the Pentagon on the impact of the policy until it is repealed.
*
In a statement released on Thursday, Moran said the discharged soldiers included an intelligence collector, a military police officer, four infantry personnel, a health care specialist, a motor-transport operator and a water-treatment specialist. "How many more good soldiers are we willing to lose due to a bad policy that makes us less safe and secure?" asked Moran, a member of the House panel that oversees military spending.
*
The White House has said President Barack Obama has begun consulting with Defense Secretary Robert Gates and Chairman of the Joint Chiefs of Staff Adm. Michael Mullen on how to lift the ban. But the administration won't say how soon that might happen or whether a group of experts will be commissioned to study the issue in-depth, as some Democrats have suggested.
Likewise, Democratic leaders on Capitol Hill support repealing the ban but have not promised to press the issue immediately.
*
While Obama and Democrats dither, careers continue to be ruined. All so that Elaine Donnelly and similar nutcases can have orgasms over keeping gays stigmatized. It is disgusting.
Posted by Michael-in-Norfolk at Thursday, March 12, 2009