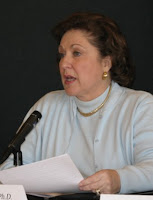 Jeremy Hooper - who I met at the Blogger Summit - has a good post over at Good As You that takes Janice Shaw Crouse - who always uses "Doctor" or "Ph.D" when referring to herself as do most of the self-anointed "experts" cited by the anti-gay Christianists - to task on the debate over gay marriage. Like so many of the anti-gay "experts" Ms. Crouse is not the "expert" she claims to be and while she does indeed have a Ph.D., , it is in a subject area that has absolutely nothing to do with the areas in which she claims to be an expert such as the family and/or gay marriage. Stated another way, using Ms. Crouse's apparent reasoning, my J.D. degree which is of a comparable educational level (and from a better university than her's I might add) must make me an expert as well on anything I decide to discuss. But I digress. Ms. Crouse who among her various titles is that she's a "Senior Fellow" at the Beverly LaHaye Institute at Concern Women [Bitches] for America. Despite all the window dressing and her use of "Dr." and "Ph.D." with her name, in the final analysis, Ms. Crouse's views are based on extremist religious beliefs and nothing else. Here are some highlights from Jeremy's smack down on her:
*
Your side wants to "protect marriage" because you think that this constant hijacking of the godly high ground adds an automatic layer of moral mayonnaise to your fogey hoagie. Others see this "victory" as another deposit they can make into their heavenly insurance fund. And then there are some of your team's more opportunistic players who want to keep this debate alive because it $ati$fie$ certain captiali$tic need$. But whatever the reasoning, there is an undeniably self-centered motivation underlying your entire movement, Ms. Crouse. And constantly telling people that we gays are the ones who are seeking validation might be soul-satisfying: But it doesn't lend one ounce of validity to your fight.
*
It's much easier for you and your cronies to tell us who we are and to tell others what we (and God) want than it is to simply shut the frick and frack up and hear what we (and God) are really saying. Because that's another one of the anti-gay movement's prizes, Ms. Crouse: Controlling the message in the most oversimplified, convenient, demonizing way possible. In fact, that might be my least favorite of all of the "pro-family" movement's prized possessions, as it's the spoiled egg that hatches all of the other toxic ideas.
*
Well said, Jeremy. Now, if only the media would challenge folks like Ms. Crouse on her lack of true credentials and make it clear to listeners/readers that the only basis for her pontifications are intolerant religious beliefs. The media holds a huge responsibility for its failure to expose people like Ms. Crouse.
Posted by Michael-in-Norfolk at Sunday, March 08, 2009

I went to high school with "dr" crouse in kentucky. she is a dangerous but hollow windbag. anon, phd., jd.