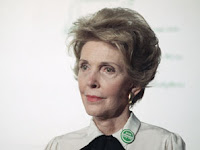 Under fire from congressional Republicans for lifting restrictions on stem cell research, President Barack Obama got a powerful endorsement for his move Monday from Nancy Reagan, the former president’s wife. *
“I’m very grateful that President Obama has lifted the restrictions on federal funding for embryonic stem cell research,” she wrote in a statement released shortly after Obama reversed the Bush administration limits. “These new rules will now make it possible for scientists to move forward. I urge researchers to make use of the opportunities that are available to them and to do all they can to fulfill the promise that stem cell research offers."
*
In yet another move that shows the re-emergence of science over religion in guiding governmental policy, President Obama is set to announce tomorrow that he is reversing the Chimperator's ban on federal financing for embryonic stem cell research. No doubt the religious extremists are wailing and wetting themselves as they convulse over the news. In my view, Obama still has a long way to go in totally reversing all of the insidious changes the Chimperator made at the behest of his Christianist masters. As I have noted before many times, I never cease to be amazed how the Christianists and the Catholic hierarchy put far more value on embryos than they do on the lives of those suffering from diseases that might be cured from this type of research. Here are some highlights from the New York Times:
*
WASHINGTON — President Obama will announce Monday that he is reversing Bush administration limits on federal financing for embryonic stem research as part of a pledge to separate science and politics, White House officials said Friday.
*
[A] White House ceremony is scheduled for 11:45 a.m. Eastern time, when Mr. Obama is expected to make an announcement. One person familiar with planning for the event said the president would also speak about a general return to “sound science” in his administration, as a fulfillment of his campaign promise to draw a demarcation line between politics and science. The Bush administration was often accused of trying to shade, or even suppress, the findings of government scientists on climate change, sex education, contraceptives and other issues, as well as stem cells.
*
Because embryonic stem cells are capable of developing into any type of cell in the body, many scientists believe that they may one day be able to provide tissues to replace worn-out organs or nonfunctioning cells and, thus, offer powerful new treatments for diabetes, heart disease, Parkinson's disease and other ailments. Some researchers say the stem cells may even be used someday to treat catastrophic injuries like damage to the spinal cord.
*
“It must be Friday night because word leaks of yet another deadly executive order by President Obama,” said Tony Perkins, president of the Family Research Council, calling Mr. Obama’s intention “a slap in the face to Americans who believe in the dignity of all human life.”
*
ut the Christopher & Dana Reeve Foundation praised the president’s plan. “By removing politics from science,” said Peter T. Wilderotter, the organization’s president and chief executive, “President Obama has freed researchers to explore these remarkable stem cells, learn from them and possibly develop effective therapies using them.”
*
As for Tony Perkins' comment, my response is that through his constant deliberate lies and disingenuous, hate based propaganda, he and his foul organization are a slap in the face to honesty and integrity. The man is truly despicable.
Posted by Michael-in-Norfolk at Sunday, March 08, 2009