Mormons Have the Vapors Over HBO's "Big Love" 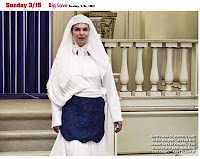 There certainly is some divine justice being visited upon the Mormon Church which aggressively involved itself in rescinding marriage rights for same sex couples in California. To me it is only fair that an organization or religion that thrusts itself into public view while endeavoring to further discrimination needs to be prepared for whatever fallout may derive from such anti-equality actions. The latest boomerang to hit the LDS in the ass is a story line on HBO's "Big Love" which brings focus to certain Mormon religious ceremonies and the weird garb apparently worn by participants (see photo at left). Not surprising, the in the course of it's hissy fit, the LDS blamed some of the unwanted coverage on "the gays." Truth be told, the Mormon Church is NOT mainstream and one can only hope that through shows like Big Love, some of the LDS's bizarre practices will be more widely exposed. Here are some highlights from the LDS pity party press release:
*
Before the first season of the HBO series Big Love aired more than two years ago, the show’s creators and HBO executives assured the Church that the series wouldn’t be about Mormons. However, Internet references to Big Love indicate that more and more Mormon themes are now being woven into the show and that the characters are often unsympathetic figures who come across as narrow and self-righteous. And according to TV Guide, it now seems the show’s writers are to depict what they understand to be sacred temple ceremonies.
*
The Church’s strength is in its faithful members in 170-plus countries, and there is no evidence that extreme misrepresentations in the media that appeal only to a narrow audience have any long-term negative effect on the Church. Examples:
*
In recent months, some gay activists have barraged the media with accusations about “hateful” attitudes of Latter-day Saints in supporting Proposition 8 in California, which maintained the traditional definition of marriage.
*
Now comes another series of Big Love, and despite earlier assurances from HBO it once again blurs the distinctions between The Church of Jesus Christ of Latter-day Saints and the show’s fictional non-Mormon characters and their practices. Such things say much more about the insensitivities of writers, producers and TV executives than they say about Latter-day Saints.
Posted by Michael-in-Norfolk at Tuesday, March 10, 2009