Daily Show Teaches What Journalists Should Being Doing But Don't 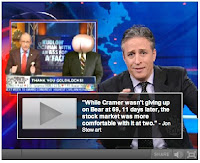 There has been a great deal of chatter about the ongoing confrontations between Jon Stewart of the "Daily Show" and “Mad Money” host Jim Cramer in which Stewart has basically shredded Cramer and revealed the lack of serious reporting that goes on all too much of the time by those in the mainstream media. Had the media done its job and asked hard questions instead of fawning over members of the Chimperator's regime the whole Iraq War debacle could have been avoided. It is nothing less than an indictment of the main media outlets that Stewart - who is on a comedy channel for God's sakes - does a better job in looking at serious issues. In fact, many young voters I know watch the Daily Show precisely because it does take on the established news media's ass kissing approach to those they should be holding accountable.
*
Locally, our news media is beyond pitiful and it is little wonder that both the Virginian Pilot and the Daily Press are in financial trouble and slashing jobs right and left. For years both papers have been operated more as advertising platforms instead of news outlets and now they are baffled as to why subscriptions are falling. The answer is easy: they report little serious news and most coverage of national or world stories are a day or more old. Meanwhile, serious readers have already found that news via other sources, principally online. One of the wonderful thing about the blogosphere is that news junkies can get much faster information than waiting for the print media. In addition, the blogosphere it is beginning to put serious pressure on lazy reporters and journalists to start doing their job. Only with an aggressive and competent news media can bad policies be nipped in the bud. Hiring news anchors because of their pretty faces instead of their minds and competence needs to change. The New York Times took note of the meeting of the adversaries here and ought to take a lesson out of Stewart's play book itself. Andrew Sullivan has a good analysis of why Jon Stewart and those like him are important:
*
Stewart - that little comic with the Droopy voice for Lieberman - is actually becoming an accidental activist. Why he matters, is why South Park matters. He, like Matt and Trey, do not leave aside their own profession from scrutiny: they have the actual balls to take it on. There is a cloying familiarity among many cable show hosts and television personalities. We all have to get along, even though some of us may believe that others of us are very much part of the problem, rather than the solution. And what Stewart has done is rip off that little band-aid of faux solidarity for a modicum of ethical and moral accountability.
*
It's not enough any more, guys, to make fantastic errors and then to carry on authoritatively as if nothing just happened. You will be called on it. In some ways, the blogosphere is to MSM punditry what Stewart is to Cramer: an insistent and vulgar demand for some responsibility, some moral and ethical accountabilty for previous decisions and pronouncements.
*
Whether or not the MSM will wake up remains to be seen. It would be wonderful if anchors and talking heads would start asking hard questions and challenging those who pretend to be "experts" but in fact are nothing more than opinionated windbags or religious nutcases.
Posted by Michael-in-Norfolk at Saturday, March 14, 2009

While I enjoy watching Cramer every night, one must remember the show is primarily entertainment. The financial networks exist to promote their advertisers financial and investment products. Who would expect them to warn about the credit bubble or coming Washington national debt collapse which will destroy much of the remaining private wealth in America today or what this will do to the dollar, the stock market, bonds, gold or the real estate market?


China is now worried about their dangerous over investment in US Treasury obligations. Washington ’s long-term choice is either repudiation or monetization. For monetization to be effective, the depreciation in the dollar would have to be substantial and this in turn would dramatically raise prices of imports for American consumers which would mean a tremendous drop in foreign imports. Debt monetization would cause more disruption to exporting nations than selective repudiation of Treasury debt.

The Campaign to Cancel the Washington National Debt By 12/22/2013 Constitutional Amendment is starting now in the U.S. See: http://www.facebook.com/group.php?gid=67594690498&ref=ts

Ron with 30 plus years in the investment business and banking industry.