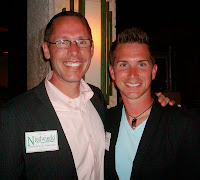 One of the bloggers I met at the Blogger Summit was Waymon Hudson (on the right at left). He and his husband, Anthony Niedwiecki, are contributors to The Bilerico Project and I am happy to report that Anthony was elected to the Oakland Park City Commission and that as the highest vote getter, he will become the City's mayor. Throughout the campaign, Anthony and Waymon were complete open about their relationship. Anthony's campaign was endorsed by the Victory Fund which seeks to asist LGBT candidates get elected to office. The Bilerico Project had this report as of last night:
*
Just ran out of the victory party to let you all know that Anthony Niedwiecki has become a city commissioner in Oakland Park, Forida, winning his first race for public office. At the time of this report, he is apparently the highest vote getter, making him the Mayor of Oakland Park, a community of 42,000, for the next four years.
*
It appears that Anthony is the only gay candidate to win in this year's round of elections in this region.
*
And, everyone at the party was congratulating Bilerico's own Waymon Hudson, Anthony's husband, on becoming First Lady of Oakland Park, Florida.
*
The Sun Sentinel has more election coverage here.
Posted by Michael-in-Norfolk at Wednesday, March 11, 2009

Thanks so much, Michael!

I am so proud of Anthony and the campaign we ran. We made our family (our marriage, foster son, and extended family) a strong part of our campaign and challenged people to face their ideas about what family and "family values" really means. I think by the overwhelming vote for Anthony over 65%), we see that many people got the message.

I couldn't be happier for Anthony, my city, and our community.