Expect GOP Lunatic Base to Call For Steele's Head 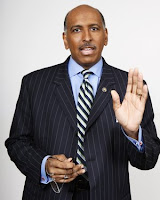 In what appears to be a free wheeling and rather candid interview with GQ, embattled RNC chair Michael Steele states some views that will likely have James Dobson, Tony Perkins and other members of the far right base of today's GOP writhing on the floor in convulsions and ultimately (when they regain control and stop wetting themselves) calling for Steele's immediate dismissal. Even though Steele's statements in many ways denotes the direction in which the GOP needs to move if it ever hopes to regain majority support. In short, Steele seems to have some grasp of reality and the fact that American society is changing whereas Dobson, Limbaugh and others like them are totally untethered from objective reality. Here are some highlights from the GQ interview that will have Christianist heads exploding (questions posed to Steele are in bold face):
*
Why do you think so few nonwhite Americans support the Republican Party right now?’ Cause we have offered them nothing! And the impression we’ve created is that we don’t give a damn about them or we just outright don’t like them.
*
Do you have a problem with gay priests who are celibate? No, it’s your nature. It’s your nature. You can’t—I can’t deny you your nature.
*
Let’s talk about gay marriage. What’s your position? Well, my position is, hey, look, I have been, um, supportive of a lot of my friends who are gay in some of the core things that they believe are important to them. You know, the ability to be able to share in the information of your partner, to have the ability to—particularly in times of crisis—to manage their affairs and to help them through that as others—you know, as family members or others—would be able to do. I just draw the line at the gay marriage.
*
Do you think homosexuality is a choice? Oh, no. I don’t think I’ve ever really subscribed to that view, that you can turn it on and off like a water tap. Um, you know, I think that there’s a whole lot that goes into the makeup of an individual that, uh, you just can’t simply say, oh, like, “Tomorrow morning I’m gonna stop being gay.” It’s like saying, “Tomorrow morning I’m gonna stop being black.”
*
So your feeling would be that people are born one way or another. I mean, I think that’s the prevailing view at this point, and I know that there’s some out there who think that you can absolutely make that choice. And maybe some people have. I don’t know, I can’t say. Until we can give a definitive answer one way or the other, I think we should respect that.
*
Are you saying you think women have the right to choose abortion? Yeah. I mean, again, I think that’s an individual choice.
*
You do? Yeah. Absolutely.
*
I hope Steele is wearing a bullet proof vest when the Far right wingnuts get wind of this interview - not that many of the trike me as GQ readers - and that he watches his back It will be most interesting to see how this all plays out. Oh, and I suspect that the Nazi Pope will NOT be happy with the gay priest remarks.
Posted by Michael-in-Norfolk at Wednesday, March 11, 2009