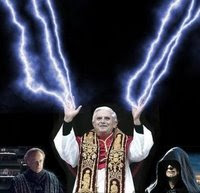 As I have noted in other posts, membership in the Roman Catholic Church is falling in many areas of the country. While an influx of Hispanic immigrants principally in the Southwest has so far protected the Catholic Church from overall significant declines in membership, I suspect that as those immigrants become assimilated and in some cases more educated, devotion to the Church will wain as in other demographic groups and regions of the country. A Church leadership that continues to have a 12th century mindset and which takes positions in direct contradiction with medical and scientific knowledge will almost guarantee that alienation of the new immigrant group will occur over time. The Pope's grudging admission that he made mistakes - and is clearly NOT infallible - in connection with his dealings with Holocaust denier, Bishop Richard Williamson, doesn't even scratch the surface of things about which Benedict XVI and the Church hierarchy need to admit error. The Church's treatment of gays is certainly another area where profound wrongs have occurred yet the Church continues to denigrate and demonize LGBT individuals. Here are some highlights from the Washington Post:
*
LONDON, March 12 -- Pope Benedict XVI, acknowledging "mistakes" that he "deeply regretted," issued an unusual letter Thursday attempting to quiet a storm of protest over his embrace of an excommunicated bishop who denied that Nazis killed Jews in gas chambers. The letter also appeared to be a broader attempt to answer recent criticism of his papacy.
*
The pope suggested that the controversy over Bishop Richard Williamson could have been avoided with a simple Internet search. Church critics have said that his handling of the issue exposed a bungling Vatican bureaucracy and that this and other recent errors threatened to disillusion some of his followers.
*
In an interview before the letter was published, George Weigel, a papal biographer and senior fellow at the Ethics and Public Policy Center in Washington, said the Vatican operation is "dysfunctional." Benedict "is not well served by the apparatus at the Vatican," Weigel added. "I think it is going to change. It has to change."
*
The Rev. Thomas J. Reese, a Jesuit priest at Georgetown University's Woodstock Theological Center, said that it was "insane" that the Georgetown basketball team had a bigger media operation than the Vatican. . . . Reese said that one out of four Catholics born in the United States has left the church, which should be "working on how to make the Gospel intelligible to people in the 21st century." But the handling of the Society of St. Pius X, he said, makes it appear that the pope is consumed with a small group who seek a return to old Latin rites.
*
Meanwhile a story in the Greenbay Press Gazette illustrates the hemorrhaging of members that is occurring in many parts of the Church in the USA., fueled I believe by the Church's refusal to (a) punish members of the hierarchy involved in the sex abuse cover up and (b) move into a 21st century level of knowledge and modernity. Here are some highlights:
*
Wisconsin's fish fry tradition at Catholic churches has no problem reeling in large crowds, but a national religion survey shows that fewer people are filling pews in churches of all faiths. The American Religious Identification Survey, released this week, shows a 10 percentage point decline in the past 18 years in the number of Wisconsinites who identify themselves as Catholic — 29 percent compared with 39 percent in 1990.
*
The changes have long been evident. Parochial schools are consolidating. Some parishes have dissolved, and the church continues to grapple with a shortage of priests. Nuns, who at one time ran local hospitals and schools, have all but vacated their posts.
*
Disillusionment with the church in the wake of the clergy sexual abuse scandal and some financial scandals also have contributed to declining rates of Catholics in Wisconsin. The state has had its share of cases, most recently with the 2004 sentencing of Father John Feeney for molesting two youths in 1978 while he was at St. Nicholas Parish in the town of Freedom. "The church looks like a hypocritical institution for some," Carey said.
*
I continue to believe that only sustained massive losses of members (and money) will force the Catholic Church to make long needed changes. The chances of such changes occurring under Benedict XVI I rate as somewhere between slim and none.
Posted by Michael-in-Norfolk at Saturday, March 14, 2009