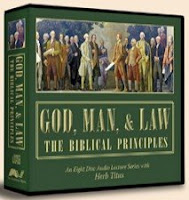 From time to time I check to see what the anti-gay elements are up to and in the process of engaging in that exercise I happened across an article on CNSNews.com discussing the oral arguments on Proposition 8 before the California Supreme Court and was surprised to see that Herbert Titus, founding dean of Pat Robertson's Regent University Law School had injected himself into the debate. Titus is no stranger to far right circles and the myth of the USA being founded as a "Christian nation." His commentary on Proposition 8 further underscore the inability of the Christianists to remove their religious views from consideration of the civil laws. It is also more than ironic, however, that Titus is meddling in the families of others when his own is such a mess and one of his sons is under indictment from stealing money from his law clients. Here is a sampling of Titus' drivel:
*
[T]he real argument against same-sex marriage comes from the recognition that all law stems from God’s law. “Our legal system is based upon the assumption that if human beings pass a rule, if that rule is contrary to God’s law, its not law at all,” Titus said. “We’ve forgotten that.”
*
Ironically, the very foundation of the American legal system – God’s law – is now forbidden in American courtrooms, he added. Judges today, Titus said, have absolutely no regard for anyone who will argue on God’s law – or even natural law.
*
If the nation, in fact, allows judges to create same-sex marriage – eliminating God’s law as the basis for our own statutes – the consequences will be destroy democracy. “It may not happen in a single generation, but ultimately that’s what happens,” Titus said. “Every society that has attempted to establish a system of rules governing sexual relationships discovers that if they do not honor God’s law with regard to sex, then they will suffer economically, they will suffer physically, and certainly they will suffer loss of liberty.”
*
Highlights from a Virginian Pilot story gives a glimpse of God's law and family values as practiced in the Titus family. To me, the story indicates that Titus needs to clean up his own family before he pontificates and tries to deny family rights and equality under the to others (Note: his son always wore his alleged Christian faith on his sleeve to gain the confidence of victims):
*
The FBI on Tuesday arrested disbarred lawyer Troy A. Titus on a federal indictment, charging him with defrauding at least $1.5 million from former clients, including onetime R&B star Teddy Riley.
*
Agents arrested Titus, 42, at his Chesapeake home about 7 a.m. following a lengthy investigation into his real estate dealings. Titus made a brief appearance that afternoon in U.S. District Court, where the 10-count indictment was unsealed.
*
While the indictment lists cash losses of about $1.5 million, it says the actual losses could be millions more when foreclosed-upon homes and properties are factored in. According to the indictment, Titus had claimed to be making real estate investments on a number of properties, but he often never filed deeds of trust or he filed deeds of trust on properties that already had liens on them worth more than the properties' assessed values.
*
Titus also is accused of preying on a widow.
Posted by Michael-in-Norfolk at Monday, March 09, 2009