Right Wing Watch has a good summary of the disingenuous fuming and pronouncements coming forth amongst the professional Christianist organizations now that gay marriages are legally occuring in California. As I have said many times I find it amazing how these alleged followers of Christ utterly ignore his message of love of neighbor and instead disseminate a non-stop message of hate and disparagement of others. The millions that they spend (i) paying themselves salaries for being full time anti-gay bigots and (ii) seeking to deny gays civil legal rights could be so much better used feeding the hungry, clothing the poor, and working to end injustice. This insane obsession with persecuting gays to me indicates that these folks - not us gays - are the ones with the deep-seated mental health issues. These folks truly need some serious mental health counseling and perhaps drug therapy as well. Here are some highlights:
*
Last month, when the California Supreme Court ruled in favor of marriage rights for gays and lesbians, the Right was typically apoplectic, unleashing everything from Nazi metaphors to warnings that the end of the world was near. In the weeks since, it doesn’t seem as if the Right has calmed down much and now that marriages have begun in the state, they have come out in force to rail against it and warn of dire consequences to come.
*
While Concerned Women for America announced a Day of Prayer and Fasting in hopes that “our nation will return to the Biblical values on which she was founded,” others such as Biblical Family Advocates screeched that “California has slid off of its foundations into moral anarchy” and accused the court of mandating sin by allowing gays to “sodomize the entire culture”: "It is truly amazing that the homosexual community desired the government to get out of their bedroom and now they use the government to force their bedroom upon the general populace. They will not be satisfied until they have sodomized the entire culture, including the family, schools and even the church which should be a safe haven for children, not hedonistic indoctrination camps."
*
Vision America’s Rick Scarborough, another professional homophobe who rakes in money hand over fist through his anti-gay rants and lies had this to say:
*
Those who think the judicial assault on marriage won't affect them had better think again. It will impact on everything from adoption to public-school curriculum. Church-based agencies will be forced to place children with same-sex couples or get out of the adoption business. The schools will be required to teach that there's absolutely no difference between a family with a mommy and a daddy and one with two mommies, or two daddies." Scarborough urged the people of California and America to "resist this monumental evil."
*
Meanwhile the Klan loving folks over at Family Research Council rant this disingenuous and alarmist ad: 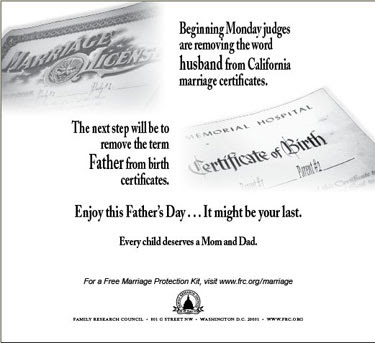