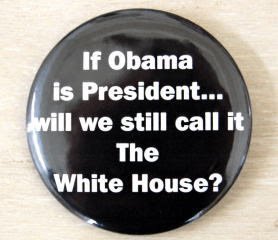 The political button above was being sold at the Texas Republican state convention. I guess I truly should not be surprised in light of what I saw happening to the GOP before I submitted my resignation to the Party a number of years back, citing the increasing theocratic insanity of the Party as an obstacle my conscience could not overcome. While my principal objects were based on the merging of fundamentalist Christianity and the Party platform, looking behind the words the real issue was that only white, preferrable fundamentalist Protestant or wingnut Catholics, were truly welcome. As I have noted before, if one reads the rhetoric on most of the Christianist websites, the real message is that blacks, Hispanics, gays, liberals, and non-Christians are NOT welcomed to join the GOP party base.
*
One has to ask why the national GOP organization doesn't stop this sh*t. I think the real reason is that the national party has become just as secretly - or perhaps not so secretly - racist as the folks selling this disgusting button. I suspect we can anticipate one truly ugly and nasty campaign cycle as the Christianists and racists pull out all the stops to defeat Obama. The soul of the country is truly at stake in this election. Here's a link to more on the button sales.
Posted by Michael-in-Norfolk at Tuesday, June 17, 2008

Vanyael provided a link to your blog and this post. Thanks for sharing this. And to be honest with you, I'm not the least bit surprised.

I am not surprised either and although this vendor has supposedly been barred from GOP events, it's a case of the Party's true face being shown and them seeking to do damage control after the fact.

As I have said before, my family historically have been Republicans going back to the 1950's but now, due the Christianists and Bush/Cheney, everyone is voting a straight Democrat ticket. I continue to hope and pray that the GOP suffers horrific losses in November since that is the only thing that may lead to the resurrection of the former GOP.