Tim Rutten has a column in the Los Angeles Times that evaluated the disaster that has been the Bush/Cheney rogue regime. Not only has the Chimperator been one of the worse - if not THE worse - presidents in the nation's history, but he and Emperor Palpatine Cheney have severely damaged the USA's image and credibity abroad as shown by the chart set out below. These two men and their willing accomplices are a national disgrace and embarrassment and truly need to be held accountable for their lies and the countless thousands of lives lost due to their insanity and hubris. Unlike Rutten, I am in full favor of war crimes investigations and, if the evidence supports it, the imposition of some death penalty verdicts. An example needs to be made that NO ONE, including the president and vice president, are above the law. Here are some highlights from Rutten's column:
*
Apart from understanding how and why the Bush/Cheney administration tricked the American people into going to war in Iraq, no question is more urgent than how the White House forced the adoption of torture as state policy of the United States. An investigation by the Senate Armed Services Committee, now partly concluded, already has gone a long way toward explaining the decision to place the United States among the world's pariah states.
*
In a statement delivered Tuesday, committee Chairman Carl M. Levin (D-Mich.) said: "Some have suggested that detainee abuses committed by U.S. personnel at Abu Ghraib in Iraq and at Guantanamo were the result of a 'few bad apples' acting on their own. It would be a lot easier to accept if that were true." In fact, Levin said, senior U.S. officials "sought out information on aggressive [interrogation] techniques, twisted the law to create the appearance of their legality and authorized their use against detainees."
*
As the Washington Post reported Tuesday, however, documents and e-mails collected by investigators for the Armed Services Committee show that officials working for then-Defense Secretary Donald H. Rumsfeld began their research into waterboarding, stress positions, sensory deprivation and other practices as far back as July 2002, months before military commanders began asking for permission.
*
[T]he current Senate investigation has established definitively that the drive to make torture an instrument of U.S. policy originated at the highest levels of the Bush administration -- mainly in the circle that included Cheney, Rumsfeld and Addington. This group had come to Washington determined to implement its theory of "the unitary executive," which holds that presidential powers of all sorts have been dangerously diminished since the Vietnam War. The fact that these guys seem to have defined executive branch power as the ability to hold people in secret and torture them pushes the creepy quotient into areas that probably require psychoanalytic credentials.
*
Right-wing -- as opposed to conservative -- commentators already have begun branding the Senate investigation and parallel House inquiries as a witch hunt . . . Part of the hysteria over all this that you see in places like the Wall Street Journal editorial pages stems from an anxiety that congressional inquiries, like that of Levin's committee, will lead to indictments and possibly even war crimes trials for officials who participated in the administration's deliberations over torture and the treatment of prisoners.
*
The Bush administration has been wretchedly mistaken in its conception of executive power, deceitful in its push for war with Iraq and appalling in its scheming to make torture an instrument of state power. But a healthy democracy punishes policy mistakes, however egregious, and seeks redress for its societal wounds, however deep, at the ballot box and not in the prisoner's dock. To do otherwise risks the stability of our own electoral politics almost as recklessly as the Bush/Cheney regime has risked our national interests abroad. 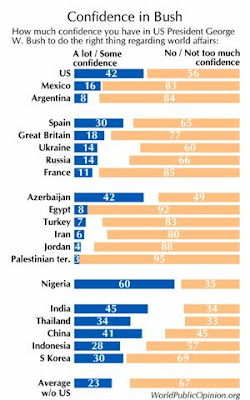