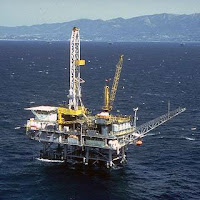 The Chimperator's regime has been trying to roll back environmental protections and open more areas for oil and gas exploration for the last eight years. That has pretty much been Chimpy's entire energy policy, in fact. Not that increased offshore drilling would do anything to relieve the current gasoline price hikes. Bush's only goal is to benefit his fat cat friends in the oil industry. As one who worked in the oil industry (and is not knee jerk anti-oil company) and who was involved in both domestic and overseas exploration and production, I know full well that even a huge new find would in all likelihood not come on line as a serious source of oil and gas for many years - probably ten years or more at a minimum. Despite this fact, now John McCain is jumping on the increased drilling mantra because I suspect he believes that the American public is too uninformed and stupid to understand that promises of more domestic production will do NOTHING to change the current energy situation. In his column tioday in the New York Times, Paul Krugman likewise zeros in on McCain's cynical approach to this issue. Here are some highlights:
*
Blaming environmentalists for high energy prices, never mind the evidence, has been a hallmark of the Bush administration. . . . And the administration has spent the last eight years trying to convince Congress that the key to America’s energy security is opening up the Arctic National Wildlife Refuge to oil drilling — even though estimates from the Energy Information Administration suggest that drilling in the refuge would make very little difference to the energy outlook, and the oil companies themselves aren’t especially interested in punching holes in the tundra. But it still comes as a surprise and a disappointment to see John McCain joining that unfortunate tradition.
*
The item that made news, however, was Mr. McCain’s call for more offshore drilling. On Tuesday, he made this more explicit, calling for exploration and development of the currently protected outer continental shelf. This was a reversal of his previous position, and it went a long way toward aligning his energy policy with that of the Bush administration. That’s not a good thing.
*
So why would Mr. McCain associate himself with these characters? The answer, presumably, is that it’s a cynical political calculation. I’m reasonably sure that Mr. McCain’s advisers realize that offshore drilling would do nothing for current gas prices. But they may believe that the public can be conned. A Rasmussen poll taken before Mr. McCain’s announcement suggests that the public favors expanded offshore drilling, and believes (wrongly) that this would lower gasoline prices.
Posted by Michael-in-Norfolk at Friday, June 20, 2008

In a recent report about estimates of profit, amount, and scale of drilling on the outer continental shelf in the Gulf, Pacific, and Atlantic ( http://www.eia.doe.gov/oiaf/aeo/otheranalysis/ongr.html ) , they say in paragraph 5 that "access to the Pacific, Atlantic, and eastern Gulf regions would not have a significant impact on domestic crude oil and natural gas production or prices before 2030." Would this give us tons of new oil when it gets up and going? No. When offshore drilling estimates are added to the total expected from ALL of the lower 48 states, "annual crude oil production in 2030 is projected to be [only] 7 percent higher" and regarding how this 7% would affect prices, the Department of Energy concludes that "any impact on average wellhead prices is expected to be insignificant."