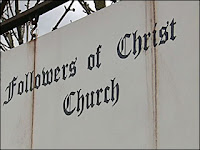 The self-righteous, sanctimonious talking heads of the Christian Right blabber endlessly about how only one man and one woman can properly raise children and that, in opposing gay adoption and/or narriage, gay parenting deprives a child of a proper home. Based on yet another story where a minor has needlessly died because of the religious fanaticism of the parents, perhaps a more appropriate restriction on parenting would be one that removed children from the custody of their religiously insane parents who would deprive them of necessary medical treatment. The latest story comes out of Oregon where a teenage boy died from a urinary infection that could have been easily treated. Yet another example of the evils of religious extremism. Hopefully, the parents (and ideally, the board members of the "church" involved) will be prosecuted and imprisoned, although imprisonment seems too light of a penalty for needlessly ending a 16 year old's life. Here are highlights from KATU-TV:
*
GLADSTONE, Ore. - A 16-year-old boy who, along with his parents, believed in faith healing died as a result of an inflammation in his urinary system that is treatable, a deputy medical examiner said Wednesday. The boy, identified by authorities as Neil Beagley, was suffering from an inflammation in a tube leading from his bladder - the urethra - that made him unable to urinate, according to Dr. Clifford Nelson, a deputy state medical examiner. Beagley filled up with urine, and that eventually ruined his bladder and kidneys and resulted in heart failure, said Nelson, who called it "an absolutely horrible way to die."
*
KATU first learned that Beagley was sick back in late March and informed authorities about his condition. The Department of Human Services confirmed they checked on his condition and were assured by Beagley's family that he would be taken care of. . . . It was not clear what transpired between March and this week. Gladstone police said the boy got sick about a week ago and his condition worsened Sunday, causing members of his faith-healing church to gather for prayer rather than take him to a hospital. The boy died Tuesday afternoon surrounded by family members and a board member of the church called authorities.
*
Police said the boy and his family are members of the Followers of Christ Church, a highly secretive group in Oregon City that has been practicing a distinct brand of religion since at least the mid-40s after moving to Oregon from Idaho. They believe they are God's chosen children and that God's will can heal those he chooses. In March, Beagley's 15-month-old cousin, Ava Worthington, died at home from bronchial pneumonia and a blood infection. Her parents, Carl and Raylene Worthington, also failed to contact a doctor and are awaiting trial on criminal charges in her death. Beagley was also the brother of Raylene Worthington.
Posted by Michael-in-Norfolk at Thursday, June 19, 2008