Gay Couples Are Aware That Voters are Watching 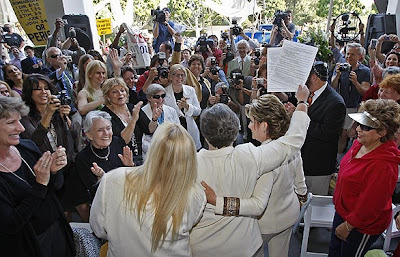 As the gay weddings begin in California, the Los Angeles Times has a story that might be worthwhile reading for gays nationwide. In short, it examines the fact that straight voters are watching the wedding coverage and gay couples need to use some common sense in how they comport themselves. The same goes for gays everywhere and not just in the contaxt of weddings. Personally, I can understand the desire and perhaps even thrill of "in your face behavior" at Pride events and other venues, but sometimes all we do is play directly into the hands since those are precisely the images that the Christianists disseminate in their campaign to depicit all of us as sex crazed perverts. Momentary fun and thrills in inappropriate settings should not be allowed to undermine the hard work and efforts of many gays to demonstrate to the straight world that as gays we are in reality not any different than everyone else and that we are entitled to the same rights. While it is not fair, the reality is that while living openly and proudly, we perhaps DO need to hold ourselves to a higher standard of conduct at times. In my professional life within the local legal community, my goal is to be known as an attorney who happens to be gay as opposed to "the gay attorney." Public images do matter and the concept is something that I wish some local gay oriented establishments could get through their heads. Here are some story highlights:
*
The gay and lesbian couples who packed a Hollywood auditorium last week had come seeking information about California's new marriage policies. But they also got some unsolicited advice. Be aware. Images from gay weddings, said Lorri L. Jean, chief executive of the Los Angeles Gay and Lesbian Center, could be used by opponents in a campaign designed to persuade California voters that gays and lesbians should not have the right to marry. Those getting married, she cautioned, should never lose sight of what they might be supplying to the other side.
*
Sitting close to his husband-to-be in the audience, hairstylist Kendall Hamilton nodded and said he knew just what she meant. No "guys showing up in gowns," he said."It's a weird subject," added Hamilton, 39, who plans to wed his partner of five years, Ray Paolantonio. "We want everybody to be free, but the image does matter. . . . They are going to try to make us look like freaks."
*
The first legal same-sex marriages in California were performed Monday night, and thousands more gay couples are expected to flood into clerks' offices in the coming weeks to obtain marriage licenses. It's all happening with both sides keenly aware that in less than five months, voters will decide whether to amend the state Constitution to define marriage as being between a man and a woman only. With that in mind, proponents are trying hard to manage what kinds of same-sex marriage images Californians see during this year's so-called Summer of Love.
*
[B]oth sides know that the images of some partnerships may be more palatable than others." One of the things that have hurt the gay effort in California is the exhibitionism in San Francisco," which doesn't always play well elsewhere, said political analyst Tony Quinn. . . . With the initiative looming, proponents of same-sex marriage now are taking care to emphasize mainstream unions.
*
"One of the things about the gay and lesbian community is we're known for our outrageousness, our flamboyance," said West Hollywood City Councilman John Duran, who is president of the board of directors of Equality California, an organization pushing for same-sex marriage. "But we're under this incredible political pressure not to have those portrayals" right now.
Posted by Michael-in-Norfolk at Tuesday, June 17, 2008

ACTUALLY YOU WOULD BE THE CUTE GAY ATTORNEY

The sad truth is that, simply kissing in public will also be construed by many of our enemies as crazy and over the top behavior, too.