More Priests Accused of Sex Abuse in the News 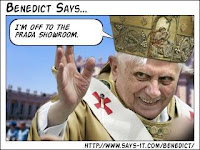 The dirty laundry of the Roman Catholic Church just keeps on coming out. As always, I am continuing to wait (most likely in vain) for the members of the hierarchy that allowed such abuses to occur to be held accountable. The first story comes out of up state New York (http://www.dailygazette.com/news/2008/feb/15/0215_priest_abuse/) where police are looking for more victims of a former New York City priest who had a vacation home upstate:

GREENFIELD — State police want to know whether anyone in the Capital Region was victimized by a 65-year-old priest who resigned as pastor of a Queens church late last year after allegations of sexual abuse involving boys. Monsignor George F. Zatarga owns a seasonal home in the town of Greenfield, according to Senior Investigator John Brooks of the state police in Wilton. The New York Daily News recently reported that an 18-year-old man from New York City reported that he had been molested by Zatarga at his home upstate.
Mark Lyman, upstate coordinator for SNAP (Survivors Network for those Abused by Priests), praised the state police for taking a “proactive” approach to investigating Zatarga. Lyman said the Daily News story published in January indicated that five men have come forward saying that they were sexually abused as young men by the priest at his upstate home. Some of these abuse allegations go back 20 years, Lyman said.
The story said that at least five men have told the diocese that Zatarga molested them as teenagers and that the most recent allegations came in 2007, when the priest allegedly took an 18-year-old man to Zatarga’s home outside Saratoga Springs. Before Zatarga became pastor of American Martyrs Church, he served as diocesan vicar for senior priests for six years. During his 40-year career as a priest, Zatarga served as chaplain at Bishop Loughlin High School in Brooklyn and at Archbishop Molloy High School in Queens and was pastor of several churches, among other duties with the Brooklyn diocese, the bishop’s statement said.

Elsewhere, the Catholic Diocese in Fort Worth, Texas, has indicated that a priest accused of molesting children is HIV positive (http://pageoneq.com/news/2008/Accused_pedophile_priest_discovered_to_be_HIVp_0215.html):
The diocese leader then got verbal confirmation from Magaldi as well as a letter from his doctor who said he has HIV, Svacina said. Church officials said they believe he has been HIV positive since 2003. The diocese then alerted the alleged victims — at least five minors in two states — and the parishes where Magaldi served for nearly four decades, Svacina said.
Magaldi, 71, lives in a retirement center and diocese officials declined to disclose where. He has previously said he was innocent of the sexual abuse allegations, for which he has not been charged. Magaldi was removed as a priest in 1999 amid claims of sexual misconduct in Providence, R.I., where he served from 1960-90, and the Fort Worth area, where he served from 1990-92 and 1993-99.
Magaldi is one of six priests in the Roman Catholic Diocese of Fort Worth accused of abusing minors, according to 700 pages of previously secret files that were part of a sexual abuse lawsuit settled in 2005. The documents were released by a judge last year. In Rhode Island, three separate allegations were reported in 1998, 2002 and last year against Magaldi.
Posted by Michael-in-Norfolk at Friday, February 15, 2008