Some People Are Gay: Get Over It 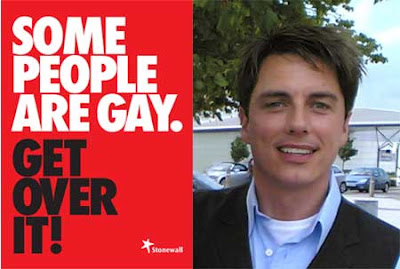 As noted at Towleroad (http://www.towleroad.com/2008/02/john-barrowman.html), John Barrowman is interviewed by UK magazine Bent in its February issue about how his sexuality affects the way fans, particularly kids, perceive his Torchwood character Captain Jack. Barrowman recently lent his support to a campaign by UK gay rights group Stonewall to fight homophobic bullying in schools, and the campaign is now set to go national. The UK will soon be plastered with hundreds of posters and stickers that hope to raise awareness about bullying and hate crimes. Obviously, a similar anti-bullying campaign is very much needed in the USA even though it would no doubt face strong opposition for the Christianists who think they have the right to ruin the lives of others by preaching a message of hate and division. Here's a quote from Barrowman:

"My nieces and nephews have known I was gay since they were born. It's always been Uncle John and Uncle Scott and that's the way it should be. People joke, 'Oh John, get off your soap box', but it is a soapbox and it's something that matters to me. It's normal, we have partners, we have sex, and we do the same, well, sort of things that men and women do... I’ve worked a lot with kids and kids don’t care, they are open to stuff. At a signing a father asked his five year old son if he wanted my autograph and he said ‘yeah, I don’t care if he likes men, he’s still my hero’."
Posted by Michael-in-Norfolk at Monday, February 11, 2008

This is cool. I like that poster. It would be great to see stuff like that around here.