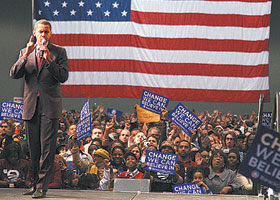 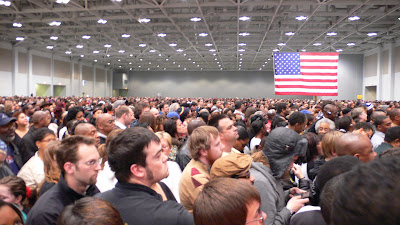 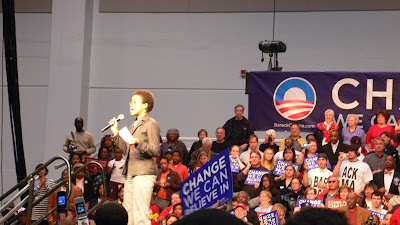 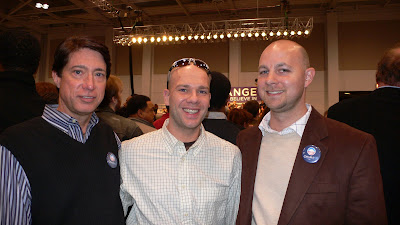 Last evening, I attended the Barack Obama rally in Virginia Beach with my friends, Marty and Christopher – we arrived just shy of four hours before he began speaking – and I must say that in all my years of being a political activist and working on many campaigns, I have NEVER EVER seen ANYTHING like it. The estimated crowd of 18,000 must be the largest number for a political rally ever in this area. The photos above are from the rally [Nicole Young, the local field organizer that I am working with is in one photo] and give some sense of the huge size of the crowd. The other thing that was remarkable was the make up of the crowd - was truly diverse: young, old, black, white, Asian, Hispanic, gay, straight. Literally, no segment of the population was left out. Located in the crowd about 30-35 feet back from the stage where Obama spoke, we had a tremendous vantage point. Hearing him speak for nearly 45 minutes (although it went by so quickly that it seemed like perhaps 20 minutes), I am even more excited and motivated to do whatever I can to work for his victory in the primaries and then in the general election.

As an aside, I spoke with one of my sisters who is likewise enthusiastic for Obama and she said that my brother had worked ALL day Saturday for Obama’s campaign. Obama can attract moderates and disillusioned Republicans in a way that Hillary just simply cannot. The Democrats truly need to wake up to this reality. Here are some highlights from the Virginian Pilot's coverage (http://hamptonroads.com/2008/02/our-time%E2%80%99-obama-declares-beach-crowd):
VIRGINIA BEACH - A throng of thousands cheered Sen. Barack Obama at a boisterous rally Sunday night, two days before Virginia’s presidential primary. "This is our moment. This is our time,” he told the Virginia Beach Convention Center crowd, estimated at 18,000 by event organizers. Obama partisans hailed the turnout as a sign that their candidate will carry the state Tuesday. “This has got to be the biggest political rally in Virginia Beach history,” said U.S. Rep. Bobby Scott, who spoke to the crowd before Obama arrived.
In Virginia Beach, Obama responded to Clinton’s argument that the first-term Illinois senator needs more experience. “Some have asked, 'Why so soon? You can afford to wait,’ ” Obama said. But, he added, “There’s such a thing as being too late.” In an apparent swipe at Clinton, Obama said, “People don’t want the same old cast of characters in Washington. They want somebody new.”
The diverse crowd at Obama’s Virginia Beach rally included senior citizens with walkers and teenagers. “America has never seen anything like this since the ’60s,” said the Rev. Marcellus Harris, pastor of First Baptist Church Morrison in Newport News. “Dr. King would be smiling now.” “I’m old enough to remember John F. Kennedy,” said Bob Sterling, 64, of Norfolk. “I get the same feeling about Barack Obama.” “He’s a miracle,” said Ayana Berridge, 21, of Cerritos, Calif., a student at Hampton University. “He’s able to inspire, to make you believe change is possible.”
Sadly, some of the comments on the Pilot article show that there are still many knuckle dragging ultra-right Neanderthals who are attempting to spread lies about Obama - e.g., that he's Muslim. I sense they fear that their days of bigoted dominance may be waning.
Posted by Michael-in-Norfolk at Monday, February 11, 2008

I just stumbled on your blog and really like it. Informative and funny. I'll keep reading! J

I also attend the Barack Obama rally yesterday evening and beyond the fact of hearing him I was even more inspired by the diversity of American who came out to hear him. This is the first time in a while where Americans of all walks of life are coming together for a common cause. It makes me proud to be a citizen in the greatest nation on earth.

Sorry to take a different point of view on this, but I am so thankful you included a photo of Yourself with Marty and Chris. You speak of them often ~ as cliche as it might sound, it's nice to put a face (or faces) with the name(s).
They're quite handsome -- as are you, I might add. Perhaps the country is, indeed, ready for a change. If the Democrats want to take the race, they need to choose someone other than Hillary. If she takes the Party nomination, it will only solidify the Republicans. As always, thanks for the update and perspective.

We are not disillusioned! ;)