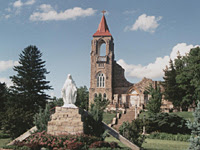 I guess this situation described in Sports Illustrated (http://sportsillustrated.cnn.com/2008/highschool/02/13/female.official.ap/index.html?cnn=yes) goes some way toward explaining why Mike Huckabee carried Kansas in the recent GOP primary - far too many evangelical and/or lunatic Catholic Kansas residents still believe it's the 18th Century, if not further back in time. I shudder to imaging the world view of some of these Neanderthals. It is frightening in this day and age that such ignorant and small minded people exist in this country. The school's principal, Vicente A. Griego, must truly have major insecurity about his own manhood. Personally, I beleive enrolling one's children in such a crazy institution ought to comprise a grounds for child abuse. Fortunately, the rest of the referees told St. Mary's Academy that they could shove it and refused to officiate the game. Here are some story highlights:
KANSAS CITY, Mo. (AP) -- Kansas activities officials are investigating a religious school's refusal to let a female referee call a boys' high school basketball game. The Kansas State High School Activities Association said referees reported that Michelle Campbell was preparing to officiate at St. Mary's Academy near Topeka on Feb. 2 when a school official insisted that Campbell could not call the game.
The reason given, according to the referees: Campbell, as a woman, could not be put in a position of authority over boys because of the academy's beliefs. The Activities Association said it is considering whether to take action against the private religious school. St. Mary's Academy, about 25 miles northwest of Topeka, is owned and operated by the Society of St. Pius X, which follows older Roman Catholic laws. The society's world leader, the late Archbishop Marcel Lefebvre, was excommunicated by Pope John Paul II in the late 1980s.

St. Mary's Academy can be reached here: (785) 437-2471 (main switchboard); academy@smac.edu (St. Mary's Academy). P.S. Viewing the school's website, there are typos, so perhaps they should at least focus a little bit on spelling as opposed to religious fanaticism.
Posted by Michael-in-Norfolk at Thursday, February 14, 2008

this "academy" is in my neck of the wods.

refs have had to call their boys soccer games because of their unsportsmanlike behavior.

It has been my experience that the more they claim to uphold traditional Christian values, the less Christian they are in fact.

Some of the most dishonest and unsrupulous attorneys I have known over the years are the ones that wear their alleged Christian faith on their sleeves. They make us "Godless faggots" look pretty darn good when it comes to practicing Christian values.

I attended that school for 6 years when I was a girl. They didn't treat girls exceptionally well back then, but it has certainly gotten worse. If their claim is that women can't be in a position of authority over males...well, these boys have female teachers, secular and religious and everyone of those boys have mothers, all women in position of authority. The Catholic Church does not teach what the Society does, so don't confuse the two. The Society of St. Pius X has been separated from the Catholic Church for almost 20 years. I'm disgusted with the way that they treated this female referee and I applaud the two male referees who walked out of there.
Patty