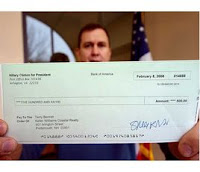 I could not resist posting about this story. The moral is that when you are the candidate, the buck stops with you. Having once run for public office myself, I know all too well that this is the reality no matter what amount of spin one puts out. I suspect that Hillary probably (1) knew nothing abut the delinquent rent payments, and (2) had no idea that her staff left the premises trashed. Nonetheless, her staff’s actions are a direct reflection on her and have now caused an embarrassment to her. Here are some highlights from Seacoastonline (http://www.seacoastonline.com/apps/pbcs.dll/article?AID=/20080213/NEWS/80213011):

PORTSMOUTH — Rochester doctor Terry Bennett has finally been paid by the Clinton campaign for rental of a Portsmouth building he owns. Now, he says he will donate the $500 check to Barack Obama’s campaign. He said he’s doing it because he likes Obama, but also as a statement on the way he feels he was treated by the staff of the Clinton campaign. ‘It was the last straw for Hillary Clinton for me,” said Bennett.

Bennett said he believes the only reason the Clinton campaign paid for renting his 236 Union St. storefront is because he became the “squeaky wheel,” contacting the Herald last week in frustration because he had not been paid for more than a month. “Thirty days went by, with no replies to phone calls, e-mails, no replies at all. Suddenly a newspaper article comes out. It was the worst publicity they could get. Three days go by and I get a check,” said Bennett.

Bennett went public last week, saying he rented a warehouse/office space to Clinton campaign workers for five days prior to the Jan. 8 presidential primary. He rented the space for $100 a day to be used as a campaign headquarters and dormitory.

Not only was he not paid, but Bennett said the campaign volunteers left the premises trashed. He said there were fast food containers all over the place and lots of campaign signs left behind.
Bennett said he’s giving the money to Obama because, besides Clinton, he is the only other Democratic candidate. But he said he also likes the man.

“I like Obama’s story enormously,” said Bennett. “He came from nowhere and made his way through Harvard Law School. I can appreciate the struggle. He and I never forgot where we came from. I, like him, struggled to get through medical school. This is a guy I think is very thoughtful, who hasn’t forgotten his beginnings. He is speaking across what used to be a chasm and has transcended a lot of insurmountable barriers.”

When Bennett’s story came out, other people contacted the Herald about unpaid bills from the Clinton campaign. Iowa resident Richard Reese is the owner of Top Job Services Inc., a cleaning service in Des Moines. His company was hired in November of last year, prior to the Iowa caucuses, to clean the Clinton campaign headquarters on a regular basis. Reese provided the Herald with invoices and said he had not seen one penny of the $7,561.70 he is owed. As of Wednesday, he still hadn’t.
Posted by Michael-in-Norfolk at Thursday, February 14, 2008