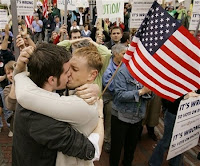 I suspect that as occurred in Massachusetts, the gay-hating fundies will be crying foul now that their identities are being made public. It's always entertaining to see the bigots squirm when everyone can see them for who they really are. I say this because KnowThyNeighbor has published the names of thousands of Florida residents who signed the state's petition to place a constitutional amendment banning same-sex marriage on the November, 2008 ballot. While it is true that the ballot initiative is clearly a vehicle of the GOP to try to get out the homophobic crowd, some of these folks probably thought that they could stay safely anonymous.
As I previously posted, 611,000 signatures were required to get a measure on the Florida ballot. The Christianists and GOP backers of the initiative found themselves more than 20,000 signatures short of the goal in January, but a last minute push collected more than 92,000, more than enough to get the measure to the ballot. KnowThyNeighbor publishes the easily searchable list of names, which are a matter of public record, so people can see for themselves who among their neighbors is intolerant.
Posted by Michael-in-Norfolk at Wednesday, February 13, 2008