Water Boarding Is Legal According to the White House 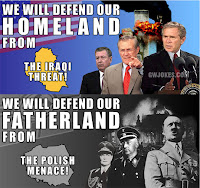 If we needed any more proof that the Chimperator is a war criminal, the White House’s admission that water boarding – a technique that is illegal under both U.S. and international law - has been utilized against detainees should seal the case. I truly do not understand the mindset of how the Christianists who continue to lick the Chimperator’s and Cheney’s boots reconcile their enthusiastic support of the use of torture with their allegedly Christian beliefs. All I can figure is that since they see Muslims (along with gays, blacks, brown skinned Hispanics, Jews – in short everyone not just like them) as less than fully human, they think it is alright to torture them and treat them in inhuman ways. Talk about perverting the message of Christ. The plain and simple truth is that Bush and Cheney should be tried and convicted for their illegal actions. Here are some highlights from the LA Times (http://www.latimes.com/news/nationworld/nation/la-na-torture7feb07,0,1028317.story):

WASHINGTON -- The White House said Wednesday that the widely condemned interrogation technique known as waterboarding is legal and that President Bush could authorize the CIA to resume using the simulated-drowning method under extraordinary circumstances. The surprise assertion from the Bush administration reopened a debate that many in Washington had considered closed. Two laws passed by Congress in recent years -- as well as a Supreme Court ruling on the treatment of detainees -- were widely interpreted to have banned the CIA's use of the extreme interrogation method.

Sen. John McCain of Arizona, now the front-runner for the GOP presidential nomination, has led efforts to outlaw waterboarding and other harsh interrogation methods previously employed by the CIA.In a recent GOP presidential debate, McCain said it was inconceivable that "anyone could believe that [waterboarding is] not torture. It's in violation of the Geneva Convention. It's in violation of existing law." The leading Democratic contenders for the White House, Sens. Hillary Rodham Clinton of New York and Barack Obama of Illinois, have taken similar positions.

CNN's Situation Room reported that Vice President Dick Cheney, an ardent defender of U.S. tactics in the war on terror, was "defiant" about the use of waterboarding on suspects in an appearance today at the Conservative Political Action Conference in Washington, D.C.

Cheney said that he supported President Bush's national security decisions, which included the approval of waterboarding along with other harsh interrogation tactics. "I've been proud to stand by [Bush], by the decisions he's made," said Cheney, who then asked aloud, "Would I support those decisions today?" "You're damn right I would," he answered himself, to loud cheers.
Posted by Michael-in-Norfolk at Sunday, February 10, 2008

Well put! Hopefully a better choice of Leader will be made the American people in this current election. Bush and his team have made too many bad choices and made the US look bad internationally.