Ted Haggard and the Man Behind “Families With a Mission” 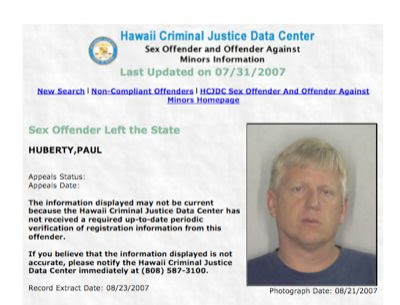 I have long thought that most of the prominent Christian Right leaders are little better than con-artists hiding behind the religion label to avoid regulation by authorities. In CNN's recent series that included the Christian Right, it definitely looked as if these pastors were living well - Falwell, et al, clearly did not look like they had not missed a meal, donuts, Twinkies, or high calorie dessert. Now, the supposedly "de-gayed" Ted Haggard is certainly helping to further prove this view. This story from the Seattle Stranger (http://slog.thestranger.com/2007/08/families_with_a_mission) ought to raise some serious questions in the minds of even the most delusional fundies. Pam Spaulding's term "sheeple" definitely applies to anyone foolish enough to give money in response to Haggard's request:

Ted Haggard, as we learned today on Colorado Confidential, wants you to pay for his and his wife’s living expenses while they go to college—they’re destitute, you see. (Colorado Confidential reports that the Haggards currently own a house in Colorado Springs valued at close to a three quarters of a million dollars.) In an open letter sent to Haggard’s gullible “supporters,” the disgraced preacher gives two addresses where money can be sent. Checks can be sent to Haggard’s mailing address in Phoenix or, if a supporter needs a tax deduction, checks can be sent to Families With a Mission, a charity based in Colorado Springs. “[Write] their check to ‘Families With A Mission’ and put a separate note on it that it is for the Haggard family,” Haggard writes in the letter posted on Colorado Confidential, “then Families With a Mission will mail us 90% of the funds for support and use 10% for administrative costs.”
As posted earlier, local attorney and Slog reader Dave Coffman located documents on file with the Colorado Secretary of State that showed Families With a Mission “voluntarily dissolved” on February 23, 2007. Hm. Weird—who knew you could get a tax deduction from dissolved charity? And it gets weirder: There’s only one name on file with the Colorado Secretary of State in connection with Families With a Mission: Paul Huberty.
And here’s what Coffman learned when he started searching through public records: A man named Paul G. Huberty was convicted of having sex with his 17 year-old ward while he was in the military and stationed in Germany. Paul G. Huberty eventually moved to Hawaii, where he was on that state’s sex offender registry—you can download a PDF here. Hawaii’s sex offender registry mentions a conviction for a sex offense in 2004. Court records in Hawaii show that Paul G. Huberty was found guilty of attempted sexual assault in January of 2004 (download ‘em here, here, and here), and sentenced a year in jail with all but six months suspended. Huberty was also put on probation for five years, ordered to take polygraphs, not allowed to possess pornography, “not allowed on the property of Kona Christian Academy” and other schools, not allowed to posses firearms, forbidden from foster parenting or being the guardian of a minor, and ordered to pay restitution to a crime victims fund.
When Paul G. Huberty’s moved out of the state of Hawaii he was required to register his new address, which he did: 855 Pebble Creek Ct., Monument, CO 80132, the “principal mailing address” for the charity Families With a Mission, which also happens to be a home owned by Paul Huberty, the registered charity’s agent.
So the man who heads up the defunct charity Families With a Mission—the charity that’s going to take a 10% cut from all “tax deductible” donations to the Haggard family—would appear to be a registered sex offender. Well, in Hawaii at any rate. Paul Huberty has not, according to publicly available records, registered as a sex offender in Colorado, something he is required to do by state law. Coffman put in a call to officials in Colorado to see if Huberty has registered too recently to appear on the sex offenders website, and he’s waiting to hear back.
Posted by Michael-in-Norfolk at Saturday, August 25, 2007