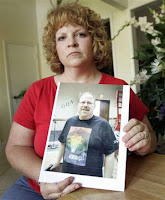 This op-ed on 365gay.com (http://www.365gay.com/opinion/oped/oped.htm) is a good response to allegedly Christian churches that will not bconduct funerals for gays, such as the church in Texas that withdrew its offer to host a funeral when it was discovered that the deceased military veteran was gay. Read the full op-ed. Here are a few highlights:

[BACKGROUND: In August 2007, a fundamentalist mega-church in Texas refused to conduct funeral services when it found out the deceased man was gay. Rev. Lea Brown, the openly lesbian pastor of Wichita Falls Metropolitan Community Church (Texas) and a veteran of the U.S. Army, has a few thoughts about that.]
Whew. I don't know about you, but I sure sleep better at night knowing the Christian churches in Texas are standing by their principles. Take the High Point Church in Arlington, Texas, led by Rev. Gary Simons (brother-in-law of mega-church pastor Joel Osteen). The church believes that homosexuality is a sin. When they recently found out that they had inadvertently (according to their version) agreed to provide a funeral for a gay man, they withdrew their invitation 24 hours before the event on the principle that they didn't want to appear to be endorsing "that lifestyle." Sure, the grieving family was left scrambling to find an appropriate venue in which to say goodbye to their loved one, and then contact 100 expected guests about the change of location in their time of sorrow. But hey, principles are principles. Aren't you glad that at least in Texas there are church folks who are willing to risk looking like heartless bigots rather than betray what they believe to be their "Christian" beliefs?
I mean, let's give credit where credit is due. They chose one principle that they believe is true (homosexuality and homosexuals must be rejected), when there are so many principles that they could have chosen instead. Let's review a few, shall we?
First, there is the principle of compassion, which dictates that we seek to understand the suffering of others, and do what we can through kindness to help in times of need.
Then there is the principle of gratitude. Cecil Howard Sinclair was a veteran of the United States Navy, and he served in the first Gulf War. He was willing to risk his life for our country, and for principles like "freedom of religion" that High Point members enjoy each day.
Finally, there is the principle of hospitality. In the Bible, in the Gospel of Matthew Chapter 10 Jesus instructs his followers to shake the dust from their feet from any town that does not welcome them warmly and listen to what they have to say. It seems that hospitality was rather important to Jesus
Posted by Michael-in-Norfolk at Monday, August 20, 2007

Frankly, Judeo-Christian-Islamic barriers to GLBT participation is in our own interests, as intolerance is the hallmark of ALL the Abrahamic superstitions.

Being "spiritual" does not require being "one of them" in their religions of hate, destruction, and death, particularly those that hail from a primitive tribal society with and super-abundance of zealots and fanatics that are inimical to life, freedom, and authenticity.

My desire is that they close their doors to all but their elect, so others can behold their spiritual vacuity replaced by absolutist dogmatism and absurd superstitions since the re-birth of Humanism in Renaissance Europe. Keeping GLBT "out" keeps us from "falling in" their deceptions, fraudulence, and hypocrisy built on a labyrinth of primitive tribal motifs and superstitions.

GLBT are already vulnerable to "wolves" in sheep's clothing, so why not praise these folk for erecting their barriers to further vulnerabilities by nefarious and injurious forces "all in god's name." They can keep their lethal, emotionally unstable deities to manifest just how desperate and arbitrary their "faiths" have always been, and always will be.

If there is a god, GLBT exclusion from the assembly of lemmings is truly divine justice, compassion, and mercy that we should welcome with joyous embrace.