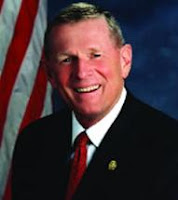 On this day in 2004, activist Michael Rogers outed anti-gay conservative Congressman Ed Schrock (R-VA) on his website Blogactive.com. The most damning claim is served up August 30, with his proof available for all to download, Schrock's voice message to a local gay dating phone line -- proof corroborated by two Hill staffers who confirm that it's the congressman's voice. Schrock dropped out of his reelection campaign two weeks after the first allegations are made. By all reports, he no longer lives in this area and has largely dropped out of sight.
I personally knew Ed Schrock in my GOP days. In many ways, Ed struck me as a decent person. It is sad that he felt so trapped that he resorted to Mega Phone trysts. I guess my gaydar must have sucked at the time because I never got any vibes that Ed was gay. In retrospect, I do recall that his wife always seemed a bit strained and uncomfortable - perhaps she knew Ed's secret and worried that it would ultimately come out.
Once I came out and moved to Norfolk from Virginia Beach, I began to hear rumors about Schrock, but at first did not believe them to be true. I even spoke to Ed about the rumors and suggested that, whether or not the rumors were true, he might be well advised to take a less actively anti-gay stance in his voting record. Afterwards, Schrock's chief of staff subsequently told me to be quiet and basically threatened me. Still later I went further and warned GOP elected officials in the Virginia Beach delegation to the Virginia Legislature that the GOP's continued anti-gay agenda was making Schrock a potential target. All I received was nasty e-mails and/or the silent treatment. Only Congresswoman Thelma Drake has ever had the class to apologize to me in person and again over the phone for her harshness toward me at the time. While I may disagree with some of her political positions, Thelma has shown that on a personal level she is a class act.
Posted by Michael-in-Norfolk at Sunday, August 19, 2007