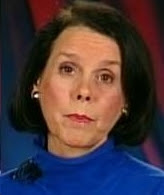 A post on Pam's House Blend got me wondering about the actual credentials of Elaine Donnelly, President of the so-called Center for Military Readiness (pictured at left and looking like someone just passed gas nearby) and a long time foe of gays serving in the military. With increasing pressure on Congress to review the "Don't Ask, Don't Tell" policy, CMR will be pulling out the stops on its anti-gay crusade. Thus, the true agenda of the organization becomes very relevant, particularly since it has been my experience that often these anti-gay alleged "experts" are not in fact experts when it comes to having actual credentials. To make matters even worse, all too often, our lazy, half-assed news media provides platforms for these people yet NEVER asks about their actual credentials (or lack thereof) which obviously would have a direct bearing on the weight one should give to their opinions.
Checking the CMR website, Ms. Donnelly's background is as follows:
She attended the University of Detroit and Schoolcraft College, resides in Livonia, Michigan with her husband, Terry, and is the mother of two grown daughters. She is a former member (1984-86) of the Pentagon’s Defense advisory Committee on Women in the Services (DaCOWITS), and the 1992 Presidential Commission on the assignment of Women in the armed Services.
As one who put in quite a few years as a GOP activist in the 1990's, I know all too well that appointments to these types of bodies depend more upon (A) how much money one (or one's spouse) has given to the GOP, or (B) what group is pushing for your appointment so that you can be its mouth piece. Therefore, from the information on the CMR web site, I have to wonder whether Ms. Donnelly has any real credentials. The site simply fails to provide enough information to document that she does have any legitimate background other than her opposition to (1) women in the military and (2) gays in the military.
A look at the CMR Board of Advisers only adds to my sense of ill ease. Among the members of the Board of Advisors are:
BEVERLY LAHAYE, the Chairman, former President, and founder of Concerned Women for America;
PHYLLIS SCHLAFLY, President of Eagle Forum who began her self-worship cult by opposing the Equal Rights Amendment that would have given women full equal rights under the U. S. Constitution;
WILLIAM A. & PRUDENCE FIELDS, who have performed in musical theater and at the 1984 and 1988 Republican National Conventions, as a bass-baritone and mezzo-soprano (Prudence has been the county chairman in eight political campaigns, and is a long-time activist in Eagle Forum.);
KATE WALSH O'BEIRNE, the Washington Editor of National Review; and
ALLAN C. CARLSON, PH.D., formerly affiliated with Family Research Council and author of numerous anti-gay books and articles.
True, the CMR Board of Advisers includes many retired military personnel, the majority of who have been retired for 20 to 30 years, if not more. No doubt these individuals are "window dressing" to make the organization appear to have some legitimacy. However, based on the names listed above, it is pretty obvious where the real direction of CMR originates. I believe it is fairly safe to say that CMR is largely an affiliate of Concerned Women for America, Family Research Council, and Eagle Forum. If only the news media would so indicate before Ms. Donnelly is allowed to make her anti-gay screes.
Posted by Michael-in-Norfolk at Sunday, August 19, 2007

Email ThisBlogThis!Share to TwitterShare to FacebookShare to Pinterest
Labels: Center for Military Readiness, gays in the military