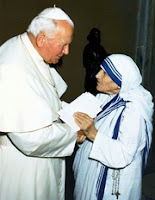 This story from Yahoo News about a new book being released about Mother Teresa (http://news.yahoo.com/s/time/20070823/wl_time/motherteresascrisisoffaith) shows that this noble woman had many spiritual doubts. I believe that if one is a thinking, rational, and perceptive person, one cannot help but have spiritual doubts from time to time or even for extended periods of time. Faith involves doubt and coming to terms with it as opposed to blind acceptance. If anything, I have respect for Mother Teresa who at least could voice her doubt as opposed to disingenuous blowhards like Pat Robertson, Jerry Falwell, and James Dobson, to name a few, who act as if they have all the answers and have a direct line to God. Here are some highlights from the article:

On Dec. 11, 1979, Mother Teresa, the "Saint of the Gutters," went to Oslo. Dressed in her signature blue-bordered sari and shod in sandals despite below-zero temperatures, the former Agnes Bojaxhiu received that ultimate worldly accolade, the Nobel Peace Prize. In her acceptance lecture, Teresa, whose Missionaries of Charity had grown from a one-woman folly in Calcutta in 1948 into a global beacon of self-abnegating care, delivered the kind of message the world had come to expect from her. "It is not enough for us to say, 'I love God, but I do not love my neighbor,'" she said, since in dying on the Cross, God had "[made] himself the hungry one - the naked one - the homeless one." Jesus' hunger, she said, is what "you and I must find" and alleviate. She condemned abortion and bemoaned youthful drug addiction in the West. Finally, she suggested that the upcoming Christmas holiday should remind the world "that radiating joy is real" because Christ is everywhere - "Christ in our hearts, Christ in the poor we meet, Christ in the smile we give and in the smile that we receive."
Yet less than three months earlier, in a letter to a spiritual confidant, the Rev. Michael van der Peet, that is only now being made public, she wrote with weary familiarity of a different Christ, an absent one. "Jesus has a very special love for you," she assured Van der Peet. "[But] as for me, the silence and the emptiness is so great, that I look and do not see, - Listen and do not hear - the tongue moves [in prayer] but does not speak ... I want you to pray for me - that I let Him have [a] free hand."
The two statements, 11 weeks apart, are extravagantly dissonant. The first is typical of the woman the world thought it knew. The second sounds as though it had wandered in from some 1950s existentialist drama. Together they suggest a startling portrait in self-contradiction - that one of the great human icons of the past 100 years, whose remarkable deeds seemed inextricably connected to her closeness to God and who was routinely observed in silent and seemingly peaceful prayer by her associates as well as the television camera, was living out a very different spiritual reality privately, an arid landscape from which the deity had disappeared.

And in fact, that appears to be the case. A new, innocuously titled book, Mother Teresa: Come Be My Light (Doubleday), consisting primarily of correspondence between Teresa and her confessors and superiors over a period of 66 years, provides the spiritual counterpoint to a life known mostly through its works. The letters, many of them preserved against her wishes (she had requested that they be destroyed but was overruled by her church), reveal that for the last nearly half-century of her life she felt no presence of God whatsoever - or, as the book's compiler and editor, the Rev. Brian Kolodiejchuk, writes, "neither in her heart or in the eucharist."
Posted by Michael-in-Norfolk at Friday, August 24, 2007