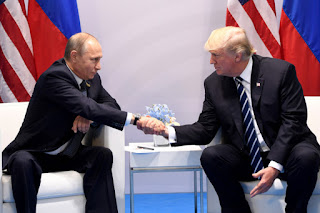 As a student of history and a long time political activist - first for the GOP and now against the GOP - I find it chilling to watch what has been transpiring over the past eleven months.  The lessons of history from the Russian Revolution - first the overthrow of a monarchy and then the overthrow of a short lived democracy - and the rise of Hitler are utterly ignored by much of the American population or thought as irrelevant.  Viewers of Fox News, of course, have no grasp of what is even happening given the alternate universe that Fox presents, not to mention it's function as the American equivalent of Pravda under the Soviet Union.  Worse yet, Republicans are aiding and abetting in the threats to our democracy with abandon and helping American oligarchs to loot the country.  In a piece that is dead on, Andrew Sullivan looks at the first year of Putin's asset in the White House.  The entire piece is set out below and ought to be mandatory reading for anyone who doesn't have their head in the sand or up their posteriors.

What are we to make of Vladimir Putin’s first year in the White House? How has he done.

I’m only slightly kidding. Or rather I’m just channeling a CNN interview earlier this week with James Clapper, former director of National Intelligence. Here’s what Clapper said: “I think this past weekend is illustrative of what a great case officer Vladimir Putin is. He knows how to handle an asset, and that’s what he’s doing with the president […] You have to remember Putin’s background. He’s a KGB officer. That’s what they do. They recruit assets. And I think some of that experience and instincts of Putin has come into play here in his managing of a pretty important account for him, if I could use that term, with our president.”

Clapper clarified his statement by saying he was being figurative, rather than literal. So let’s just ask a figurative question, shall we? How successful has the Kremlin’s figurative investment been this past year? Pretty damn impressive.

Look first at Putin’s domestic goals. His core concern, as with any despot, is the legitimacy of his pseudo-democratic autocracy - which means, in turn, discrediting the very different features of the liberal democracies of the West. And in this, he must be scarcely able to believe his luck. After decades of the West’s championing of liberal democracy, the American president has spent his first year attacking it. Trump has exhibited contempt for a free press, describing the bulk of Western journalism as “fake news,” words that have gladdened the hearts of dictators across the planet. He has minimized Putin’s assassination of critical journalists, saying that America has no moral standing to criticize. He has treated the judiciary either as instruments of loyalty — hence his packing of the federal bench — or as pests to be slandered or dismissed. He prefers total loyalty from law-enforcement officials to the actual rule of law. For good measure, Trump has legitimized Putin’s core model of governance — that of a benevolent cult hero of the nation, shored up by religious reactionaries — by plagiarizing it. As for the other critical aspect of Putinism — the looting of the treasury by oligarchs — I give you the latest tax bill. It even carves out special goodies for real-estate investors.

Then there is Russia’s permanent interest in deepening the racial and partisan divides in America — the better to force the United States to be more concerned with internal strife than with foreign affairs. On this, Putin’s success is even more impressive. What better propaganda could the Kremlin get than the Charlottesville horrors, the racial divide crippling the NFL, or the candidacy of Roy Moore? In the Cold War, the Kremlin constantly cited America’s racial strife as proof that, whatever its democratic pretensions, the country was still a bastion of white supremacy. Now, much of American academia and an entire rising generation agree with what the Soviets long argued. As for the stability and legitimacy of liberal capitalism, Putin could scarcely do better than the GOP tax proposal. When economic inequality is at record highs, undermining the social compact that undergirds capitalism, the GOP is making things far worse. It would also add well over a trillion dollars to the U.S. debt. Trump is not just looting the Treasury for himself and his buddies, he is looting the younger generation as well.

Internationally, Putin has had an even bigger year. One of his central goals — the disintegration of the European Union and the entire concept of the West — has been advanced by Washington in ways never seen before. Trump backed Brexit, breaking the U.K. away from its European partners; he supported Marine Le Pen in France for the same reason; and he has routinely lambasted Merkel, whose power is now hanging by a thread. He chose Poland, where an authoritarian party is busy dismantling judicial independence, as the site for his major foreign-policy address. He has permanently undermined the core Article 5 commitment that an attack on one NATO country is an attack on all of them, by being the first U.S. president to equivocate on it. America has also broken with its European allies by withdrawing from the Paris Accords on climate, threatening the Iran nuclear deal, and backing the ethno-nationalist extremists who now run Israel on the status of Jerusalem. Last week, the U.S. found itself utterly isolated at the U.N. on the question, and openly threatening all its allies with payback. In the Middle East, Russia has never been stronger — it is now the key player in the future of Syria, while Putin’s naked annexation of Crimea and sections of eastern Ukraine remains in place, unmentioned by the White House.

What more could Putin ask for? Well, he could hope that his grotesque attack on the last U.S. election would lead to no serious effort to prevent it happening again. And lo, an American president has emphatically refused to lift a finger to defend the Constitution he is duty bound to protect. There’s been no attempt by the White House to protect the integrity of our elections — just a constant disdain for those who worry about them, and a general, somewhat egregious, complacency.

No American president in history has ever given Russia so much in so short a time. Congrats, Vladimir. You’ve achieved what no Soviet dictator ever managed to. Your asset in the White House, figurative or not, has given more than all the British and American traitors in the history of the Cold War.

Posted by Michael-in-Norfolk at Friday, December 22, 2017