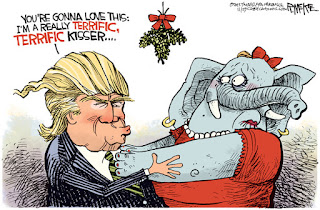 As a previous post noted, Der  Trumpenführer has stated that he wants to spend much of 2018 on the campaign trail for congressional Republicans running for re-election.  If this happens, it will be a huge gift to Democrats, especially in states like Virginia where Trump and GOP policies have motivated grass roots Democrats to get out and vote in record numbers.  Trump, of course, blinded by his own perception of his own magnificence, seemingly doesn't grasp that his base in most states makes up 27-30% of the voting population is cannot propel Republicans to re-election.  A piece in Politico looks at the dire warnings Republicans are giving to Trump about what will hopefully be a historic bloodbath for the GOP.  Personally, I hope Democrats replicate Ralph Northam's "field game" as he calls it  to get out minority and younger voters in record numbers.  Both demographics hate Trump and dislike the GOP.  2018 is their opportunity for revenge, if you will.  We can make the GOP's feared bloodbath a reality.  Here are highlights from the Politico piece:

The warning, several people close to the chairwoman said, reflected deepening anxiety that a full-throated Trump endorsement of accused child molester Roy Moore in the special election — which the president was edging closer to at the time — would further damage the party’s standing with women. McDaniel’s memo, which detailed the president's poor approval numbers among women nationally and in several states, would go unheeded, as Trump eventually went all-in for the ultimately unsuccessful Republican candidate.

The backstage talks provide a window into how those closest to Trump are bracing for a possible bloodbath in the 2018 midterms, which could obliterate the Republican congressional majorities and paralyze the president’s legislative agenda. The potential for a Democratic wave has grown after Republican losses this fall in Virginia, New Jersey and Alabama, and as the president’s approval ratings have plummeted to the 30s. In recent weeks, some of the president’s advisers have taken it upon themselves to warn him directly about the fast-deteriorating political environment. Among GOP leaders, however, there is widespread concern heading into 2018. Senate Majority Leader Mitch McConnell (R-Ky.) has said privately that both chambers could be lost in November. House Speaker Paul Ryan (R-Wis.) has told donors that he fears a wave of swing district Republican lawmakers could retire rather than seek reelection.

During a conference meeting last week, House Republicans listened as the past five chairmen of the party’s campaign arm addressed the political environment. One endangered lawmaker said his main takeaway was that incumbents should spend little time worrying about Trump or the White House and focus only on controlling what they can.

As they raft a 2018 campaign plan, White House officials are cognizant that the president isn’t popular in some parts of the country. Trump is most likely to hit the trail in conservative states like Missouri or Montana with an eye toward mobilizing his core supporters. Discussions are underway, for example, about sending Trump and Pence to campaign in a southwestern Pennsylvania congressional district that the president won by nearly 20 percentage points that's holding a special election in March. While the president’s numbers are cratering in some swing states, he's expected to take on an expanded role on the fundraising circuit in 2018, which Republicans hope will allow them to swamp Democrats in campaign spending. Behind the scenes, though, the White House has been racing to find solutions to the electoral challenge. Following the Virginia gubernatorial race, the administration commissioned an after-action report to examine why the party under-performed among suburban voters. “There are 10 months to improve the fundamentals here, and the Senate map is, on paper, good. But maps don’t make majorities and I think there’s a realization that there’s at least a 50 percent chance one or both chambers could fall,” Jennings said. “In less than one year, this first term could be, for all intents and purposes, over if the Democrats take control of either chamber.”

Posted by Michael-in-Norfolk at Friday, December 22, 2017