The Stench of Trump’s Self-Dealing 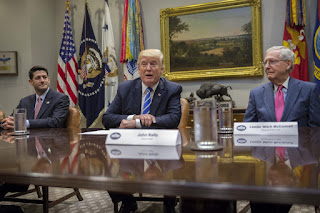 Reportedly years ago Donald Trump stated that if he ever ran for the presidency, he's run as a Republican because "they will believe anything."  With the passage of the Trump tax bill on a party line vote in both houses of Congress, Trump's purported statement has been prove true.  Of course no one should be surprised that Trump and his despicable offspring will all make out like bandits under the bill even as average Americans see a few paltry crumbs that will do little to ease their financial struggles.  Even a cursory review of Trump's past business dealings makes it clear that the man lies incessantly and always puts his financial interest first.  Indeed, America seems rapidly headed towards wealth inequalities only seen in former banana republics, pre-revolutionary France, and Britain before reforms were made to avid a French style revolution of its own.  What is most amazing is how Congressional Republicans to the man/woman are lying and saying that this bill is good for average Americans and the Middle class.  I guess that's what happens when Christofascists, the most dishonest segment of American society in my experience, take over the party base.  A column by former Republican Joe Scarborough excoriates Trump and the GOP.  Here are excerpts:

The political system is rigged for the richest insiders in America.

When we talk about the insider, who are we talking about? It’s the comfortable politician only looking out for his own interest. It is the lobbyist who knows how to put that perfect loophole in every single bill to get richer and richer and richer at your expense.

The richest Americans are paying nothing, and it is ridiculous. These guys shift paper around, and they get lucky. These hedge-fund guys are getting away with murder, when you have one who is making $200 million a year and paying very low taxes. It’s not fair. And it tells people a lot. The middle class is getting absolutely destroyed. This country won’t have a middle class soon. It’s got to end.


Those jumbled words [above] came from the campaign speeches and interviews of Donald Trump during the 2016 campaign. The excoriations of hedge-fund managers rolled off his tongue, and the promises to force billionaires to pay their fair share of taxes were an integral part of his populist platform.


What fools Trump made of those Midwestern voters who wanted the reality star to go after Washington and New York elites. As “Too Big to Fail” author Andrew Ross Sorkin reported this week, “If you’re a billionaire with your own company and are happy to use your private jet so you can ‘commute’ from a low-tax state, the plan is a godsend. . . . Private equity and real estate executives, as has been well documented, will make out like bandits.”

Those rich insiders whom Trump walloped on his way to the White House will get more than 80 percent of this tax plan’s benefits at the end of a decade. Over that same period, most Americans will see their tax rates go up. Middle-class voters and small-business owners already burdened by prohibitive medical bills, crushing student debt or high state and local taxes will face the greatest burden, while President Trump and his family will waltz away with a windfall that could reach hundreds of millions of dollars.

The Trump clan will rake in this fortune from “pass-through” deductions, estate tax giveaways and top-rate tax reductions all because of this Republican tax cut. For a president already dogged with accusations that he is personally profiting off the presidency, such a massive giveaway to the very hedge-fund managers and real estate executives he promised as a candidate to confront only adds to the stench of self-dealing that engulfs all things Trump. Like autocrats across the world, the 45th American president has perfected the art of the self-deal.


Trump’s Republican Party looks no better, nor will it when an economic reckoning finally comes to pass in a bankrupt America. There will be no justification for having thrown on an additional $1.5 trillion to our existing $20 trillion debt — at a time when unemployment was low, consumer confidence was high and Wall Street was setting records by the day.

It should be painfully obvious to a first-year economics student that there is no rational reason to pass massive tax breaks for billionaires when the economy is humming along. The only justification can be political. Republican lawmakers have been desperate for some time to reward the same wealthy political donors whom candidate Trump bashed during the 2016 primary process.

Trump was right to say then that the political system is rigged for the richest of Americans. Unfortunately, it is now Trump’s working-class supporters who will pay the highest price for believing any promise that tumbled out of the mouth of the phony plutocratic populist.

As for my "friends" who claim to vote Republican because they are "fiscal conservatives," that excuse has been blown to Hell by the Trump tax bill.  It's time they were honest and admitted that they are motivated by one of three things when they support the GOP: (i) overriding greed, (ii) racist bigotry, or (iii) religious fanaticism.  Claims of fiscal conservatism are outright lies.
Posted by Michael-in-Norfolk at Friday, December 22, 2017