How High Could That 2018 Democratic Wave Rise? 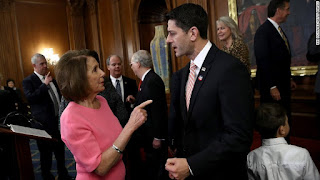 Eleven months is an eternity in politics, but if current attitudes and perceptions of the Republican continue on track, November, 2018, for some Republicans may fell like a reprise of the Battle of the Little Big Horn - personally, I love the figurative imagery of Paul Ryan in place of Errol Flynn in "They Died with Their Boots On" as the movie ends  -  as a potentially huge Democrat wave sweeps over them.  If the mood that prevailed in Virginia last month continues and Democrats wake up and utilize a coordinated ground game that worked so well for the Virginia Democrat ticket, Paul Ryan, one of the most despicable individuals in Washington after Trump himself, could find himself loosing the House speaker-ship or worse.    A piece in New York Magazine looks at what hopefully will be a nightmare for the GOP.   Here are highlights:

As 2017 approaches its end, Republicans can celebrate a year in power and passage of their unpopular but savory-to-donors tax bill. For Democrats, the happy talk will mostly be about this year being the harbinger of an extremely successful midterm election.

Before it all gets very real, Democrats probably owe themselves the pleasure of fantasizing about how high a 2018 wave they could get if everything goes right. When it comes to House races, forecaster Harry Enten has an interesting way of thinking about the high side of potential Democratic gains, operating from an assumption that the current 12.2 percent Democratic congressional generic ballot advantage holds or actually goes higher:

There are 58 Republicans in seats with a partisan lean of +12 points Republican or less. This includes representatives like House Speaker Paul Ryan and Dave Brat. […]

Now, I’m not saying all or any of these particular Republicans will lose. Most incumbents win — even in wave elections. . . . . What I am saying, though, is that when the generic ballot is showing this large of a lead for one party, the playing field of competitive races also tends to be correspondingly huge. Consider the 2010 election, when Republicans won the national House vote by 7 percentage points. Heading into that election, there were 101 Democrat-held seats with a partisan lean of +7 Democratic or less. Republicans won 65 of them (or 64 percent). If Democrats netted a similar percentage of 58 potentially vulnerable seats, they’d pick up 37 of them, or 13 more than they need to hand the gavel to Nancy Pelosi. And unlike some other calculations, this takes fully into account the GOP’s advantage in individual districts because of redistricting or efficient voter concentration or whatever.

But if it’s the high end of the congressional generic ballot polls that is most accurate — like, say, the 56/38 percent advantage for Democrats in the latest CNN survey — then things could get crazy:

There are an astronomical 103 seats that have a partisan lean of +18 Republican or less. This expanded list includes the highest-ranking woman in the House, Cathy McMorris Rodgers, and the longest-serving House member, Don Young.

That large a Democratic wave may be very unlikely. But the point is that Republicans can’t just intone “redistricting” or “incumbency” and assume their House majority can withstand any conceivable national Democratic advantage. An 18-point Democratic advantage is already conceivable, and a double-digit advantage is now actually likely. So Republicans better hope they are right that the public’s frowns over their precious tax bill turn into smiles before next November. The GOP may need all the help it can get.