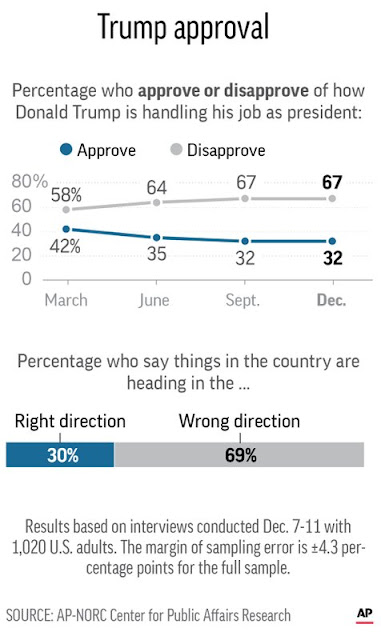 Donald Trump and his objective reality rejecting supporters got a harsh Christmas gift in the form of new polls that show that Trump is the least popular occupant of the White House of any president in history.  His approval rate is 32% while disapproval stands at a staggering 67%.  A piece in Newsweek looks at the bubble bursting findings which could likely result in yet more delusional claims by Trump and his apologists about his non-existent popularity.  69% believe the country is headed in the wrong direction under Trump/Pence and the GOP.  Here are results excerpts:

According to President Donald Trump, his administration has been one of the most successful in American history. But the public strongly disagrees.

The Republican Trump is now the least popular first-year president in the country’s history and a vast majority believes he has failed to keep the promises that won him the White House, according to two new Associated Press-NORC Center for Public Affairs Research polls.

Those figures also included a “quarter” of Republicans disapproving of Trump’s first year in office, perhaps suggesting the billionaire’s hold on his base is slipping.

Trump has routinely boasted that he’s kept campaign promises, but the AP-NORC polls indicate Americans have a far different opinion. Only 23 percent of those polled stated Trump had kept his campaign promises, while 45 percent believe he’s failed to do so and 30 percent think Trump has tried and “failed.”

Posted by Michael-in-Norfolk at Monday, December 18, 2017