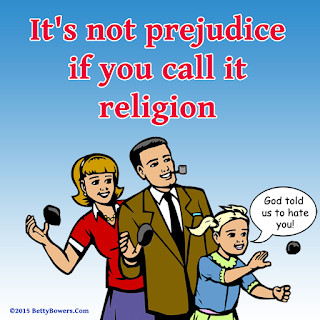 With LGBT Americans under open assault by the Trump/Pence regime, once again it is critical that the mainstream media cease legitimizing anti-LGBT hate groups and allowing them to pretend to be "conservative" or "religious" organizations. Too often these groups are given a platform by networks and others and receive to challenge about their nefarious activities or, for example in the case of FRC's Tony Perkins, white supremacist ties. Here in Virginia, Victoria Cobb of The Family Foundation (Virginia's leading hate group in all but formal designation) will get interviewed and never is asked about the deliberate lies and falsehoods constantly disseminated by her organization against LGBT Virginians. Likewise, when organizations like Alliance Defending Freedom decry their much deserved hate group designations, the media has a responsibility to make it clear why the designation was made.  It takes far, far more than being a religious based organization to win the hate group label.  A piece in Media Matters looks at the media's failure to exposes these groups for what they are in fact: hate merchants seeking exempts from the laws binding on the rest of the citizenry.  Here are article excerpts:

Alliance Defending Freedom (ADF) began 2017 by being designated as an anti-LGBTQ hate group by the Southern Poverty Law Center (SPLC) and finished the year arguing before the Supreme Court in Masterpiece Cakeshop v. Colorado Civil Rights Commision. Throughout that time, ADF fervently opposed LGBTQ equality at every step while also moving its hardline extremism more and more into the mainstream. The media, in turn, aided the group’s efforts by largely failing to contextualize its unrelenting campaign against queer and trans people. . . . Masterpiece Cakeshop is just the tip of the iceberg of ADF’s anti-LGBTQ work this year, all of which has one thing in common: seeking to make LGBTQ people second-class citizens. ADF’s representation of the plaintiff in Masterpiece Cakeshop case did not occur in a vacuum. The group and its allied lawyers have worked on at least eight other legal cases involving religious exemptions this year. Religious exemptions are often used by anti-LGBTQ groups and people to justify discrimination under the guise of “religious freedom.” ADF helped write, promote, and justify Mississippi’s sweeping anti-LGBTQ religious exemption law and fought for it in court, and it worked with Attorney General Jeff Sessions before he issued religious exemptions guidance in October. In addition, ADF has been leading the fight against transgender student equality in schools across the United States, including by influencing anti-trans “bathroom bills” in at least eight states.

SPLC labeled ADF as an anti-LGBTQ hate group in February due to a history of the group’s leaders and affiliated lawyers “regularly demoniz[ing] LGBT people, falsely linking them to pedophilia, calling them ‘evil’ and a threat to children and society, and blaming them for the ‘persecution of devout Christians.’” The hate group designation was also conferred in part for ADF’s history of supporting anti-sodomy laws, which effectively criminalize homosexuality. In 2003, the group filed an amicus brief in Lawrence v. Texas that defended state sodomy laws and called “same-sex sodomy … a distinct public health problem.” ADF also supports attempts to turn LGBTQ people straight through dangerous conversion therapy, which every mainstream medical group has discredited for decades and which has severe mental and medical health consequences for its victims.

Media Matters has found that major newspapers like The Washington Post and The New York Times tend to avoid using SPLC’s “hate group” label when it comes to anti-LGBTQ groups but frequently identify other hate groups designated by SPLC, particularly white nationalist groups. ADF and its allies have taken advantage of media’s hesitancy to use the label and actively worked to discredit SPLC’s designation, especially when media outlets do use it.
When ABC News and NBC News used the “hate group” designation to describe ADF in June reports, ADF demanded a retraction from ABC and began an aggressive media strategy to attack SPLC and attempt to discredit ABC’s and NBC’s reports. Right-wing media figures joined the chorus and echoed ADF's and others’ attacks on the designation, and ADF representatives soon made the rounds on Fox News, appearing on Fox & Friends, The Story with Martha MacCallum, and Tucker Carlson Tonight. The network has proven to be a safe space for the group to push this narrative. But it’s not just right-wing media that has been sympathetic to this campaign to discredit the “hate group” label. CNN changed a headline from “Here are all the active hate groups where you live” to “The Southern Poverty Law Center’s list of hate groups” after pressure from right-wing figures and media. News outlets are more than just hesitant to use the “hate group” label, though, and often fail to give any context to ADF’s work at all. Media outlets owe it to their audiences to, at the very least, contextualize ADF and groups like it. Yet a lot of coverage has been lacking in that context. Much of the reporting around the Masterpiece Cakeshop case fell into this trap. Time and time again, media outlets failed to contextualize ADF, instead simply noting that it was arguing the case or sometimes calling it “conservative.” In their reports on the case, The Washington Post, NPR, Los Angeles Times, and The New York Times all mentioned ADF’s role in the case but failed to mention its years-long campaign against LGBTQ equality, and those compose just a small sampling of a larger problem. A report by Time explicitly said that ADF “is making the argument that [the case] is fundamentally not about LGBTQ discrimination but about free speech” but also failed to note any of ADF’s other work combating LGBTQ equality. Leaving out important context about ADF can give readers an impression that the case, or even ADF’s work as a whole, may truly be about “free speech” rather than discrimination against LGBTQ people. ADF’s history proves that, for the group, the Masterpiece case is not about so-called “artistic freedom” or the First Amendment; it’s about preventing LGBTQ people from being fully recognized citizens in public and even private life. If news outlets won’t call it hate in 2018, they can at least give enough information for their readers to see it for themselves.