Why the GOP/Trump Tax Bill is So Unpopular 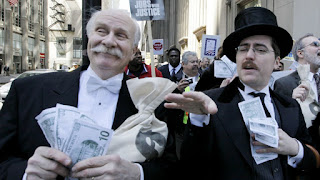 I continue to be dumbfounded by the manner in which Republicans seemingly believe that the tax bill - many are referring to it as a tax scam - signed into law by Der Trumpenführer will help them in the 2018.   At present, the bill, which is a massive give away to the very wealthy and large corporations, remains hugely unpopular (recent polls show 2/3rd's of the population views the bill negatively).  And this in a climate where almost the same percentage view Trump negatively.  On what planet are Republicans living?  Are they so lost in the Fox News, a/k/a Faux News, bubble that they truly do not get the fact that most voters realize that they are getting the equivalent of table scraps while the wealthy and large corporations are getting filet mignon with Dom Perignon?  A piece in Politico looks at the bill's unpopularity and makes the case that it fails a basic sense of fairness and that, therefore, most voters look beyond their own meager short term gains to the huge windfall to those already living a lifestyle far beyond most people's experience.  I suspect this bill will be a huge albatross to the GOP come November, 2018.  Here are article excerpts:


Undoubtedly, it’s no single thing. For example, Trump is considerably less popular than Reagan and Bush were when they and their party pushed through their own tax-relief packages, and some of this ill will is presumably spilling over to legislative initiatives he is associated with. What’s more, the bill received far less bipartisan support than previous tax overhauls, particularly the Reagan tax cuts of the 1980s. Not a single Democrat joined the GOP in supporting the new bill in either the House or the Senate. With solid opposition like this, Democratic partisans among the general public may have received a stronger signal than in previous eras of tax legislation that the bill is unworthy of their support. And, as conservative pundits have complained, the media coverage of the effort has been overwhelmingly negative. But there may be another factor behind the lack of public support for the tax overhaul: the public’s perception that some people are more likely to cash in than others. Though the bill will offer most taxpayers some relief in the near term, analysts believe that the benefits to corporations and relatively wealthy taxpayers will be much greater—especially over the long haul. Importantly, the public seems to see this: Recent polling suggests that most people see the bill as a boon to the wealthy above all. Still, even if the rich are likely to benefit the most from the new tax cuts, shouldn’t the promise of some tax relief generate at least some enthusiasm for the bill in the broader public? As it turns out, many years of research in both psychology and political science suggest not. For the most part, studies indicate that self-interest in the pocketbook sense matters a lot less than we assume: Citizens are not moved to political action by perceived shifts in how they are doing as isolated individuals. They can, however, be roused to political anger when they think others will end up doing better in comparison to people like them—that is, when they experience what social scientists refer to as “relative deprivation.” Thus, even the promise of a few more dollars in one’s wallet might be dissatisfying if other folks end up with thousands more. Relative deprivation can produce an especially strong reaction when a policy seems to make one’s own group worse off compared with some other group of people. This group element seems to be present in people’s thinking about the GOP tax bill. Since most people tell pollsters that the wealthy and large corporations will benefit disproportionately from the tax rewrite, it’s quite likely that many citizens have concluded that this round of tax relief will benefit “them” (the wealthy and large corporations) more than “us” (average Americans). Psychologists also find that relative deprivation can be especially powerful when it appears to violate some standard of fairness. . . . . polls suggest that most Americans do not believe that upper-income people and corporations pay enough in federal taxes. For example, according to Gallup’s 2017 Economy and Finance Survey, when asked whether they felt various groups paid their “fair share” of federal taxes, 63 percent felt that the wealthy paid too little in taxes. Sixty-seven percent felt the same way about corporations. In contrast, 51 percent felt that middle-income people paid too much in federal taxes. Other recent research indicates that tax provisions that appear to help the wealthy avoid taxes are seen as especially unfair. . . . . the level of opposition we are seeing to the bill should be no surprise. Even if many taxpayers knew that they would personally see a lower tax bill in the next few years, they might still feel like they had gotten a raw deal—and perhaps an unfair deal—relative to the well-off. [C]hanges made by the bill will have a big impact on certain taxpayers. For instance, the overhaul’s trimming of the state and local tax deduction is likely to increase the taxes of many citizens living in high-tax states like California, New Jersey and New York. Should Democrats choose to highlight this change when campaigning in these states next year, voters might act on more than a mere distaste for how much the tax plan’s tilt toward the wealthy—potentially adding to the headwinds the GOP is facing going into the 2018 elections.


Put another way, most Americans realize that the small temporary  tax break they will receive adds up to less than the very wealthy pay for a pair of shoes or dress.  Meanwhile the very same wealthy will see tens of thousands (or in the case of Der Trumpenführer, millions) in tax breaks.  Again, I hope this bill bites the GOP firmly in the ass come November, 2018.