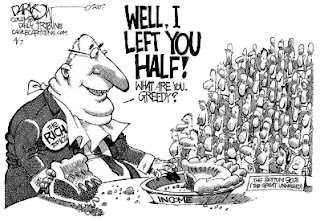 Between running candidates that are becoming increasingly extreme and backing legislation viewed as abhorrent by a majority of voters, the Republican Party appears to have a death wish.  A case in point is the so-called GOP tax bill - the millionaire/billionaire benefit bill would be a better name - which is increasingly opposed by a strong majority of voters.  Here are highlights from a new CNN poll:

With the House of Representatives likely to take up the Republican tax reform bill Tuesday, the plan faces growing opposition and a widespread perception that it will benefit the wealthy more than the middle class, according to a new CNN poll conducted by SSRS.

Opposition to the bill has grown 10 points since early November, and 55% now oppose it. Just 33% say they favor the GOP's proposals to reform the nation's tax code.

More than six in 10 (63%) see the tax bill as leaving the President [Trump] and his family better off. Just 5% think it harms the Trump clan. And disapproval of the President's handling of taxes has risen six points in the last month, to 57%.

Americans see health care and averting a government shutdown as higher priorities than passing tax reform, but among Republicans, taxes top the congressional to-do list. Overall, 17% call tax reform the top priority for Congress, below the 30% who prioritize health care and 23% who say Congress should focus on passing a bill to avoid a shutdown.

The poll also found that 83% favor continuing the policy that allows immigrants brought to the US illegally as children to remain in the country if they meet certain conditions. That's about the same as in September.

Once the true impact of the bill becomes known, I suspect opposition will grow and give Democrats a gift for the 2018 midterm campaigns.
Posted by Michael-in-Norfolk at Tuesday, December 19, 2017