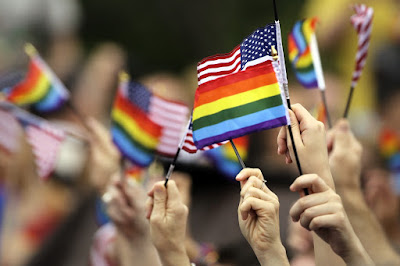 In a number of post I have looked at the threat that Trump/Pence regime poses to LGBT Americans. Trump has promised the moon to Christofascist leaders in order to secure their support - and the vote of 81% of evangelicals - and Mike Pence has a decades long history of being almost hysterically anti-gay.  I have little faith in Trump's intention to continue LGBT non-discrimination protections while the Christofascists such as Tony Perkins, president of the hate group Family Research Council, are demanding either a "religious freedom" executive order or the passage of the "First Amendment Defense Act" that would be akin to such an executive order on steroids.  The Washington Post editorial board likewise does not trust Trump's agenda in a main page editorial.  Here are excerpts:

“PRESIDENT TRUMP continues to be respectful and supportive of L.G.B.T.Q. rights,” the White House wrote in a statement last Tuesday. “The president is proud to have been the first ever G.O.P. nominee to mention the L.G.B.T.Q. community in his nomination acceptance speech, pledging then to protect the community from violence and oppression.”

The occasion for this fine statement was an announcement that Mr. Trump would not roll back Obama-era protections for LGBT people working in the federal government or for federal contractors. In an otherwise tumultuous first two weeks, this was a relatively encouraging sign.

But hardly any time passed before Trump Press Secretary Sean Spicer took a different tone in the White House briefing room, saying that the “pendulum” has swung away from religious people “in the name of political correctness,” inflaming worries that the president may yet issue an executive order on “religious freedom” that would condone discrimination. For those across the country at risk of being turned away, fired or denied housing because of their sexual orientation, it certainly does not feel as though the pendulum has swung nearly enough in their direction.

LGBT advocates fear that an order concerning the activities of federal agencies and contractors is on the way that may expand the scope for discrimination under the guise of religious freedom.

Attention often focuses on the proverbial Christian baker who does not want to make a cake for a same-sex wedding. But an order offering broad cover to claim religious exemptions from anti-discrimination rules could extend far beyond that bakery. What happens when a worker at the Social Security Administration refuses to issue benefits legally due to same-sex couples? When a federally funded family services group refuses to offer counseling to same-sex or unwed parents? When a federal contractor fires a transgender worker simply because he or she has transitioned? Every government employee or contractor should have to serve all Americans and faithfully enforce anti-discrimination laws, a line that should remain as bright as it is now.

It would also be a huge mistake for the president to sign any executive order singling out specific beliefs, such as opposition to same-sex marriage, abortion or premarital sex, for special protection. This would be a repugnant signal that such an order is meant to advance a certain set of religious doctrines and not others, and it could well violate the First Amendment’s establishment clause.

There is reason to think that the courts would intervene to stop some of the most egregious examples of discrimination under an expansive executive order. But that is not guaranteed.

Posted by Michael-in-Norfolk at Monday, February 06, 2017