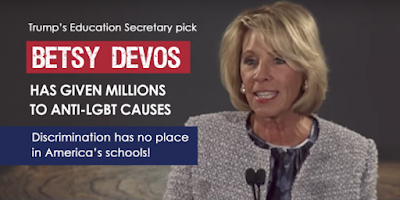 With Mike Pence - a religious extremist himself - casting the deciding vote for the confirmation of Betsy DeVos as Secretary of Education, ignorance, bigotry, and a desire to re-segregate the nation's public schools.  Worse yet, the Department of Education is now headed by a woman who also seeks to force her right wing Christian beliefs on the nation's public school children.  When she says she wants to return god to schools, it's her god and not that of liberal mainline denominations or the progressives in the Catholic Church. As for Hindus, Muslims and non-Christians, her attitude is "too bad, I don't care."  For the LGBT community, DeVos is an existential threat given her vitriolic opposition to LGBT rights.  True, she claimed to oppose discrimination, but her years of activism and staggering financial denations to leading hate groups tells a very different story.  The New York Times editorial board rightly takes Republicans who voted for her to task.  Here are excerpts:

“Government really sucks.” This belief, expressed by the just-confirmed education secretary, Betsy DeVos, in a 2015 speech to educators, may be the only qualification she needed for President Trump.

Ms. DeVos is the perfect cabinet member for a president determined to appoint officials eager to destroy the agencies they run and weigh the fate of policies and programs based on ideological considerations.

She has never run, taught in, attended or sent a child to an American public school, and her confirmation hearings laid bare her ignorance of education policy and scorn for public education itself. She has donated millions to, and helped direct, groups that want to replace traditional public schools with charter schools and convert taxpayer dollars into vouchers to help parents send children to private and religious schools.

Even champions of charters, like the philanthropist Eli Broad and the Massachusetts Charter Public School Association, opposed her nomination.

Ms. DeVos has spent tens of millions and many years in a single-minded effort to force her home state, Michigan, to replace public schools with privately run charters and to use vouchers to move talented students out of failing public schools. She has consistently fought legislation to stop failing charters from expanding, and lobbied to shut down the troubled Detroit public school system and channel the money to charter, private or religious schools, regardless of their performance. She also favors online private schools, an alternative that most leading educators reject as destructive to younger children’s need to develop peer relationships, and an industry prone to scams.

In her Senate hearing, Ms. DeVos appeared largely ignorant of challenges facing college students, as well. She indicated that she was skeptical of Education Department policies to prevent fraud by for-profit colleges — a position favored, no doubt, by Mr. Trump, who just settled a fraud case against his so-called Trump University for $25 million. It was not clear that she understood how various student loan and aid programs worked, or could distinguish between them.

In the end, only two Senate Republicans, Susan Collins of Maine and Lisa Murkowski of Alaska, opposed Ms. DeVos, leaving Vice President Mike Pence to cast the tiebreaking vote. Maybe the others figured it wasn’t worth risking Mr. Trump’s wrath . . . . Maybe they couldn’t ignore the $200 million the DeVos family has funneled to Republicans, including campaigns of 10 of the 12 Republican senators on the committee that vetted her.

The tens of thousands of parents and students who called, emailed and signed petitions opposing Ms. DeVos’s confirmation refused to surrender to Mr. Trump. They couldn’t afford to have a billionaire hostile to government run public schools that already underperform the rest of the developed world.

Did anyone who backed this shameful appointment think about them?